WHAT WENT BEFORE: Duterte promise to end contractualization 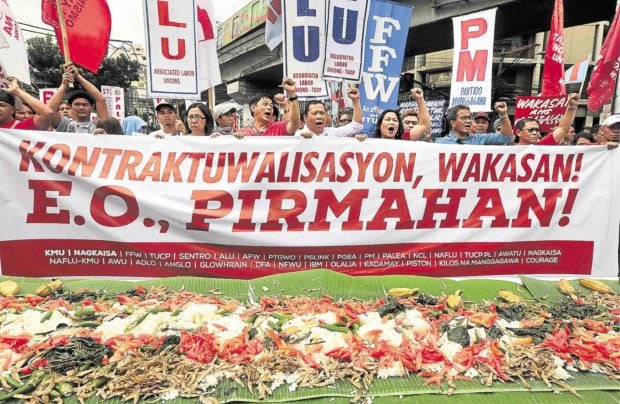 MARCH ON MALACAÑANG Leaders of various labor groups staged a rally on Chino Roces Bridge, formerly Mendiola, on Wednesday to press President Duterte to end contractualization. They
later had a “boodle” fight with him.—GRIG C. MONTEGRANDE

During the third and last debate among presidential candidates in  April 2016, then Davao City Mayor Rodrigo Duterte promised to end contractualization.

“The moment I assume the presidency, contractualization will stop . . . The problem is after six months, companies will not pay employees their bonuses and even their 13th month pay,” he said in Pangasinan province.

A month since assuming office, Mr. Duterte reiterated his statement, warning that he will train his guns literally on business owners practicing “endo.”

“You know why? I can utter things like that. I am [the] President. I have immunity. I can summon you. I will shoot you [and order] ‘Bring him to the funeral parlor. You’re making me angry,’” he said then.

“I cannot inspect every business across the Philippines,” he added. “If we have no power to close down [the business], I will go there and shoot [the owner]. Then it’s over. The business is now closed down.”