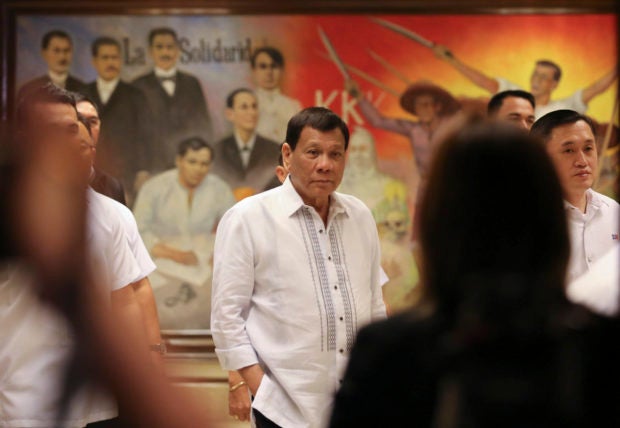 President Duterte on Wednesday defended his “strongman” style of leadership, saying the country would make no progress if he did not act like a “dictator.”

The President also said that activists could not brand his administration as a “US-Duterte regime” since he did not even like to talk to Americans.

“If you say dictator, I am really a dictator. Because if I don’t [act like a] dictator, son of a bitch, nothing will happen to this nation. That’s true,” Mr. Duterte said in a speech to former communist rebels he invited to dinner in Malacañang.

“If I don’t [act like] a dictator—my style now—nothing will happen to this country,” he added in Cebuano.

The President previously said that the military should shoot him if he extended his stay in power and became a dictator.

Speaking at a military camp in Compostela Valley, he said then that the military had the “solemn duty” to protect the Constitution.

“I’m telling you now, if I go beyond my term for just one day, I am now asking the Armed Forces of the Philippines and PNP (Philippine National Police) not to allow me or anybody else to mess up with the Constitution,” the President said to the applause of the soldiers.

“Overstay [and] become a dictator, you shoot me. I’m not joking,” Mr. Duterte added.

During the presidential campaign, Mr. Duterte, then Davao City mayor, also called himself a dictator and promised to create a crime-free society.

In his speech on Wednesday, the President, who had described himself as a socialist, said he felt insulted when activists would describe him as a US lackey.

“When I said that I would bomb the schools, they said ‘Duterte is a dictator, fascist, this and that, US’ son of a bitch.’ It’s an insult. When did I become a puppet of the Americans?” Mr. Duterte said.

“To be honest, I don’t talk to Americans—those military types, arms and such … I don’t want to talk to them,” he said. —WITH INQUIRER RESEARCH