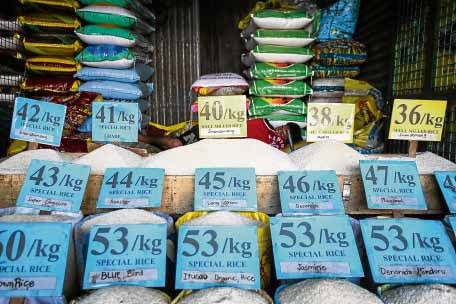 NFA rice has disappeared in many outlets, like in this stall in Kamuning Market which sells commercial rice. Meanwhile, the prices of commercial rice sold by traders have reportedly gone up. INQUIRER FILE / JAM STA. ROSA

Commercial rice should only cost around P36 per kilo in the market even as the National Food Authority (NFA) announced a shortage in its low-priced stocks, Agriculture Secretary Emmanuel “Manny” Piñol said Thursday.

Piñol made the statement amid reports of the prices of commercial rice going up, especially after the NFA said that its inventory was running low.

The agriculture secretary clarified that only the NFA was having a shortage in its rice stocks and not the country, which he said is facing a “record” surplus of the staple.

Piñol said “greedy” rice traders were taking advantage of the reported shortage in NFA stocks “to justify the increase in the price of rice in the market” and the “additional importation of rice from Vietnam or Thailand.”

He said unscrupulous rice traders were committing “daylight robbery” by jacking up the prices of commercial rice.

Citing experts, Piñol said that if traders bought rice from farmers at P18 and sold it in the market for P36, they would already gain a profit of P200 for every 50 kilos of grain. This does not include earnings from selling the husk and the rice bran, he said, speaking to radio dzMM.

The NFA said rice traders were buying farmers’ produce from P18 to P20 per kilo. It could only offer to buy rice from farmers at P17 per kilo.

Prices of commercial rice have reportedly gone up by about P3 per kilo since the NFA announced that it was experiencing a shortage in its stocks.

The NFA said the shortage was so dire that it was stopping the distribution of low-priced rice to many public markets. /cbb