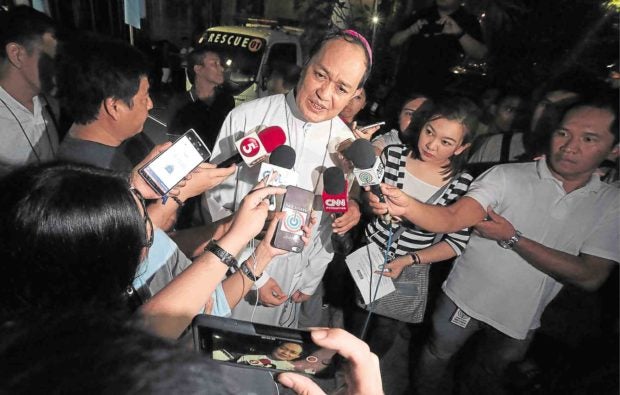 A Catholic bishop who has been a vocal critic of extrajudicial killings (EJKs) linked to the government’s war on drugs questioned the results of a National Police Commission (Napolcom) survey showing the Caloocan City police station as the “most trusted” in Metro Manila.

“‘Most trusted’ by whom? By those who gauge the trustworthiness of the police by the number of drug suspects killed during (Oplan) Tokhang operations?” Caloocan Bishop Pablo Virgilio David said in a text message to reporters on Wednesday.

“If they were ‘most trusted’ for 2017, then why did [National Capital Region Police Office chief] General [Oscar] Albayalde sack the whole police force of Caloocan last September 2017? Just wondering,” he added.

David, the vice president of the Catholic Bishops’ Conference of the Philippines, was reacting to the results of the survey conducted from October to November 2017 by the Napolcom, where the Caloocan police station received a trust rating of 88.8 percent.

Many of the EJK cases happened in David’s diocese which covers the cities of Caloocan, Malabon and Navotas.

This was after witnesses said both teenagers were killed while on their knees and pleading for their lives. The police, however, insisted that both were armed and fired first at arresting officers before they were killed in a shootout.

The killings, aside from an illegal house raid, resulted in the sacking of nearly the entire city police force in September.