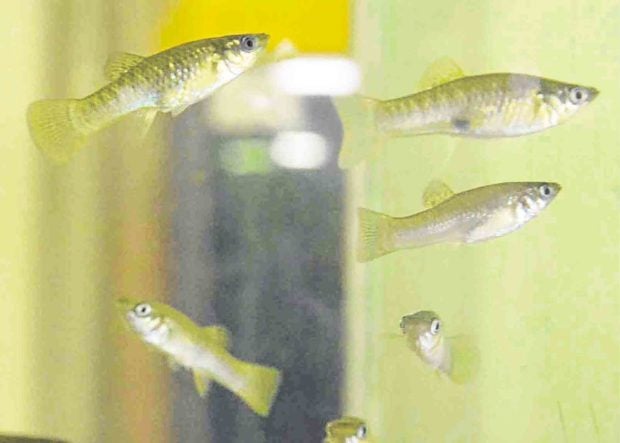 FIGHTING DENGUE The “mosquito fish,” known in Pangasinan province as “tuyong” or “itar,” feeds on disease-carrying mosquitoes. —RAY B. ZAMBRANO

Tuyong (Gambusia affinis), which voraciously consumes mosquito larvae, can be the better weapon against dengue instead of the expensive and controversial Dengvaxia, said Westly Rosario, research center chief of the Bureau of Fisheries and Aquatic Resouces (BFAR).

Dr. Anna Maria Teresa de Guzman, provincial health officer, made the same suggestion, after observing that the number of dengue cases from Jan. 1 to Feb. 5 this year was 300 percent higher than the 140 cases recorded on the same period last year.

Two dengue patients have died while 534 others have been treated in different hospitals in Pangasinan province since last month, De Guzman said on Monday. No deaths were recorded on the same period last year.

A biological solution was the best way to combat the disease, Rosario said, allaying fears that mosquito fish was an invasive species.

De Guzman said her office had not declared a dengue outbreak in the province, saying doctors have yet to establish “if these cases come from one barangay or if they are close to one another.”

Urdaneta City, which recorded one death and 82 cases, had the most number of cases, followed by Binmaley town with one death and 40 cases, she said.

Dagupan City recorded 50 cases. But as an independent component city, it is not under the provincial government’s administrative supervision.

De Guzman said most patients were children with ages ranging from 10 to 19. She said these children had not been vaccinated with Dengvaxia.

“We have been closely monitoring those who got Dengvaxia shots in the province. Some of them were vaccinated in Manila, Quezon City, Tarlac and private doctors in the province. But the good news is that they are not in the hospital and they are all healthy,” she said.

She said the abrupt increase in the number of dengue cases in the province might have been due to rains last month that created breeding places for the dengue-carrying mosquitoes.

She said it was also possible that there are creeks or ponds in the villages, where mosquitoes bred. —Gabriel Cardinoza, with a report from Yolanda Sotelo

Read Next
Ex-Ecija gov’t worker linked to slay of gov’s aide
EDITORS' PICK
TNT nears PBA crown after rout of Magnolia in Game 4
Legarda emphasizes role of ICC/IPs in nation building this IP month
Cusi: PDP-Laban convincing Duterte to run for senator in 2022 polls
Renewal of driver’s license now requires taking LTO education seminar
Climate Change Commission and Nestlé PH to discover sustainability-focused solutions
Work-From-Home is here to stay and requires reliable logistics
MOST READ
Drivers now required to take driver’s education upon license renewal – LTO
Marcos Jr’s ‘special diploma’ from Oxford: You can have it, too
OVP spox to Imee Marcos: Robredo is an extraordinary lawyer
Don’t do that: Robredo to supporters calling to boycott restos supportive of Marcos
Don't miss out on the latest news and information.