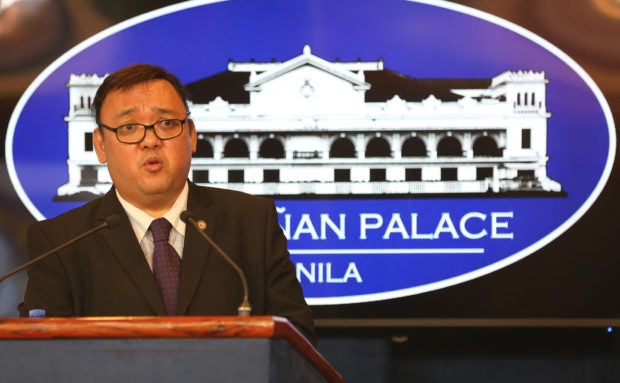 President Rodrigo Duterte was not “forcibly” removing the “lumads” from their lands amid his plan to invite investors to help develop ancestral domain areas in Mindanao, Malacañang said on Monday.

Presidential Spokesperson Harry Roque said Duterte would first ask the lumads or indigenous peoples (IPs) of Mindanao about his plan and they would be free to reject it.

“Of course, the IPs will be consulted, that’s the provision of the law. They will have to decide if they will allow foreign investors in to begin with, he looked at the law,” Roque said in a Palace briefing.

Speaking before some 1,000 “lumad” leaders in Mindanao on Thursday, Duterte said he would personally invite investors to help develop ancestral domain areas in Mindanao.

Roque said Duterte was not forcing the lumads to leave their ancestral domains.

“It is not ethnocide. He is not forcibly removing them from ancestral domains,” Roque said.

The lumads, he said, could refuse the plan if they wanted to.

“They can refuse if they don’t want, certainly,” he said.

“So when the President has a suggestion, it means it will take place within the context of the law, because as I said, he’s a lawyer,” he added.

Roque had earlier defended Duterte’s plan to develop the ancestral domain lands with the help of investors, saying it would protect IPs from being exploited by the communist rebels.