The President’s plan is designed to protect indigenous peoples in the highlands from being exploited by communist rebels
By: Allan Nawal, Leila B. Salaverria - @inquirerdotnet
Philippine Daily Inquirer / 07:30 AM February 04, 2018 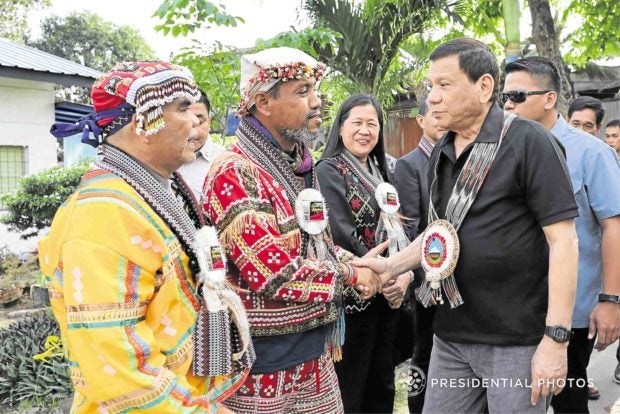 President Rodrigo Duterte’s plan to develop ancestral domain lands with the help of investors would protect the indigenous peoples from being exploited and influenced by communist rebels, Malacañang assured on Saturday.

Defending the idea, presidential spokesperson Harry Roque said “all of the data” show that the New People’s Army (NPA) was exploiting the Lumad by turning them into insurgents.

Mr. Duterte was aware that the biggest problem that the Lumad face was poverty, Roque said.

“That is why (the President) said we could allow investors to enter (ancestral domain lands) so that there would be jobs, and hunger would be reduced in Lumad communities,” he said in a press briefing in Ilocos Norte.

“If the number of jobs increases in Lumad communities, the NPA’s influence over them would wane. This means the NPA would no longer forcibly take them and turn them into fighters,”  he added.

Mr. Duterte had earlier threatened to bomb Lumad schools for supposedly spreading subversive ideas and teaching students to rebel against the government.

As for concerns that the Lumad communities run the risk of being displaced if investors were allowed to develop their ancestral lands, Roque said there were laws covering ancestral domains.

He said the plight of the Lumad had attained some urgency because of the assertion of the UN special rapporteur on indigenous communities that the government was violating their rights.

The President broached the idea of developing ancestral domain lands with the help of investors at a summit of indigenous peoples’ leaders on Thursday in Davao City.

During the event, he also vowed to provide P100 million to fund agriculture development in Lumad areas.

But, despite the Duterte administration’s assurance that the proposed investments would not cause the displacement of the Lumad from their communities, another group on Saturday assailed the President’s plan to develop their areas.

“Instead of telling the indigenous peoples to protect their ancestral lands from the hands of big landlords and foreign investors, Duterte has now become the spokesperson of foreign capitalists to further plunder the environment and natural resources,” Duphing Ogan said.

Ogan, the secretary general of Kahugpongan sa mga Lumad sa Mindanao (Association of Lumad in Mindanao, or Kalumaran), said the President’s statement betrayed his real intention to deprive the lumad of their own lands.

“The remaining ancestral lands and mineral resources have long been defended by the indigenous peoples against incursion by foreign multinational companies,” the Lumad leader said.

They now feared that massive displacements of the Lumad, as well as human rights violations, would take place, especially since Mr. Duterte had deployed soldiers in the hinterlands to protect investors engaged in such businesses as mining and oil palm plantations, he said.

“It is now clear to us that the presence of 65 battalions of the Armed Forces of the Philippines in Mindanao will secure the investments of foreign multinational companies. And this will translate to more human rights violations against Lumad leaders,” Ogan said.

Sandugo, a group of Lumad and Moro leaders, said that instead of protecting indigenous communities and upholding their struggle against exploitation, the President had “the utmost arrogance to pronounce the sale of our ancestral lands and territories.”

Jerome Aba, Sandugo cochair, also decried Mr. Duterte’s claim that the Lumad themselves were the ones making trouble.

“It is the investors, big corporations, military and Duterte that are making trouble in our lands,” Aba said.

“The plunder of the resources in our ancestral lands will further be legitimized,” he said, with the Duterte administration’s support for congressional efforts to amend the Constitution.

“Taking us, the national minorities away, from our lands is taking away our identity and our existence—(and) thus will lead to (more Lumad killings),” Aba said.

He cited the case of seven T’boli and Dulangan Manobo Lumad who were allegedly killed by soldiers in Dec. 7 last year because they wanted to reclaim their land from a coffee plantation company in Lake Sebu, South Cotabato.

“In fact, 30 Lumad have been killed under the Duterte regime and at least 30,000 have evacuated due to aerial bombings” as the government prepared the entry of foreign corporations and big local businesses in their ancestral lands, Aba said.

The Lumad leader also criticized the President for blaming the Lumad for the lack of progress in their communities.

“President Duterte even tried to make an excuse by saying, ‘The government worked hard, now you were given ancestral domain. The problem is you didn’t use it,’” Aba said.

The government, he said, did not spill blood so that the Lumad would have their ancestral lands.

“It is their forefathers. The blood of the leaders were sacrificed so that the government, or at least the Philippine Law, would recognize their right to ancestral lands. Second, they have cultivated their lands for it to be productive to feed their communities and secure the future of the children by building their own schools, which President Duterte threatened to bomb,” Aba said.