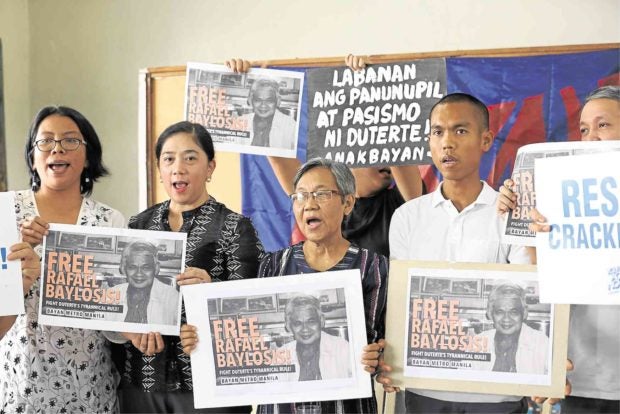 The family and supporters of Rafael Baylosis gather in Quezon City on Friday for the second time since his arrest on Jan. 31 to demand the release of the National Democratic Front of the Philippines consultant, who is being detained by the police at Camp Crame. —JOAN BONDOC

The Philippine National Police has added possession of a hand grenade to charges of illegal possession of firearms against Rafael Baylosis, a consultant for the communist-led umbrella, the National Democratic Front of the Philippines (NDFP), in the aborted peace talks with the government.

Lawyers for Baylosis on Friday said the guns and the explosive were planted by the police to keep him in custody because there was no warrant for his arrest.

Rachel Pastores of the Public Interest Law Center on Friday told the Inquirer she learned about the additional charge only during the inquest proceedings late on Thursday night.

She said the allegations and the circumstances of the arrest of Baylosis and his aide, Guillermo Roque, were “unbelievable and had hallmarks of perjury.”

“It’s a bad script, a made-up story. Even in comic strips, this plot would not sell,” she added.

The grenade was concealed in a bag of brown rice that 69-year-old Baylosis and Roque had at the time of their arrest on Wednesday, according to the Criminal Investigation and Detection Group of the National Capital Region (CIDG-NCR).

The CIDG report on Thursday did not mention the grenade but said the two men carried two .45-caliber pistols, 14 pieces of ammunition, two magazines, cellular phones and assorted documents.

PNP-CIDG NCR chief Senior Supt. Wilson Asueta said the grenade could have been inadvertently omitted in the initial reports.

The prosecutor recommended bail—P120,000—for illegal possession of firearms but not for the illegal explosives possession charge, according to Asueta.

The PNP said Baylosis was believed to be the “acting secretary” of the New People’s Army (NPA), the armed wing of the Communist Party of the Philippines (CPP).

He was among nearly two dozen NDFP consultants allowed by the government to travel abroad to participate in the talks shortly after Mr. Duterte took office in June 2016. There were high hopes then for a peaceful end to nearly 50 years of insurgency in the country.

A member of the bilateral committee that tackled political and constitutional reforms during the talks, Baylosis was the first NDFP consultant to fall in the crackdown on the Left that followed President Duterte’s order late last year to terminate the negotiations.

The President had declared the CPP-NPA terrorist organizations. Last month, he warned the “enemies of the government” to expect the full force of the state following his order “to destroy the apparatus” of the insurgency.

Baylosis and Roque were arrested in Quezon City by military and police intelligence agents who were responding to a report on Tuesday about the presence of armed men, whom they later placed under surveillance, the CIDG report said. The two men “turned out to be” Baylosis and his “buddy,” it said.

‘Out of thin air’

Edre Olalia, the NDFP’s legal consultant in the peace negotiations, said the grenade charge was added so that Baylosis could not post bail. He said that the guns were also planted by the police.

“During the inquest yesterday, suddenly a hand grenade decided to come out of thin air,” Olalia said in a statement. “Now, to make the case nonbailable, the gun decided to give birth to a hand grenade, an item which was not mentioned in the police spot report issued earlier.”

He said the Manila Regional Trial Court Branch 32, which is hearing murder charges against Baylosis and several other communist leaders, on Thursday denied a prosecution motion to cancel Baylosis’ bail and order his rearrest.

PNP Director General Ronald dela Rosa also seemed surprised by the report on the grenade. “Was there a grenade?” he asked in Filipino.

But Dela Rosa quickly added that suspects often claimed that evidence against them were planted.

“I don’t think it was fabricated. Evidence was recovered,” he said.

Olalia also disputed a report by the Northern Mindanao Police Office that police, backed by soldiers, arrested Rommel Salinas, another NDFP consultant and the alleged CPP secretary general, in Ozamiz City on Wednesday on charges of frustrated murder and arson.

Authorities said they had found a grenade wrapped in plastic inside Salinas’ backpack but he had denied owning it, saying he was not a combatant but a consultant.

Ozamiz City jail warden Carmelo Corsame said Salinas was brought to the local court for a hearing on the explosives charge.

The court allowed Salinas to post a P200,000 bail for the frustrated murder case but denied him bail for the arson case.

As they left the courthouse, CIDG personnel arrived to serve two warrants of arrest on Salinas, Corsame said. —WITH REPORTS FROM DIVINA SUSON AND ALLAN NAWAL

Read Next
UP studes on Rody threat: You drop out
EDITORS' PICK
Metro Manila’s COVID-19 cases on downward trend, but surge not over — OCTA
House energy committee chair Arroyo bats for cheap electricity
Unleash the photographer in you this World Photography Day with vivo smartphones
Look Through: The fate of impounded stray dogs
Palace warns sugar hoarders after raid on Pampanga warehouse
What to watch out for when selecting a video surveillance solution
MOST READ
DOJ indicts bank officer in $2.1 billion Wirecard fiasco
Vice Ganda dismisses rumors he broke up with Ion Perez: ‘Masaya kami’
PNP bars US legislators’ visit to De Lima due to lack of authority from court
Palace warns sugar hoarders after raid on Pampanga warehouse
Don't miss out on the latest news and information.