De Lima to Tolentino: ‘Wake up and stop your imaginings’ | Inquirer News

De Lima to Tolentino: ‘Wake up and stop your imaginings’ 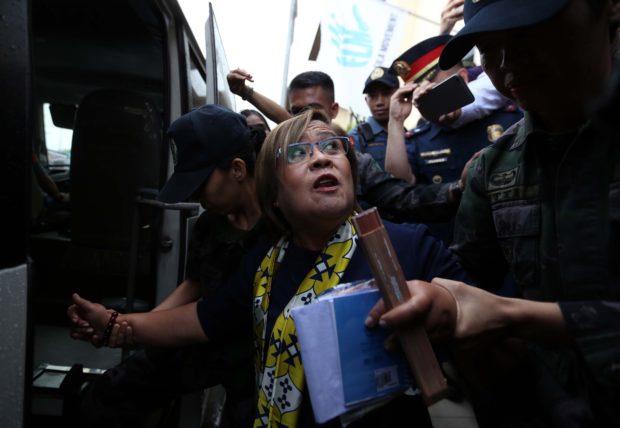 Presidential Political Adviser Sec. Francis Tolentino should “wake up,” stop his imaginings and accept that he lost in the 2016 elections, Sen. Leila de Lima said Friday.

De Lima said that she would not resign out of “delicadeza” despite Tolentino’s call for her to emulate Sen. Juan Miguel Zubiri, who resigned in 2011 amid his then-looming defeat in the electoral protest case lodged by now Senate President Aquilino “Koko” Pimentel III.

“So pathetic of Mr. Tolentino in urging me to do a Migz Zubiri,” De Lima said in a statement.

“This is my advice to you Mr. Tolentino, wake up and stop your imaginings. You are already popular. Surely, you do not need a Leila De Lima to boost your popularity or the people’s awareness of you. Stand or fall on your own merit. With acceptance comes healing,” she added.

Tolentino, who lost to De Lima for the Senate’s last and remaining spot during the 2016 elections, said he could not force De Lima to resign but noted that such act would be a more magnanimous move to make.

READ: Tolentino to De Lima: Resigning would be a noble move to make

De Lima reminded Tolentino that nobody cheated him because he “simply lost” by a million votes.

“Mr. Tolentino, you lost your senatorial bid, and this was confirmed upon the opening of the ballot boxes from the 650 clustered precincts that you designated as best exemplifying the alleged fraud or irregularity,” she said.

She said that in the recount of ballots in Tolentino’s pilot precincts showed that he had no vote recovery, and there was “not an iota of fraud or irregularity discovered that could cast doubt on the integrity and credibility of the concluded 2016 elections.”

“You were unable to surpass the votes credited to me, that is why you just had to resort to dilatory tactics. The Filipino people deserve to know the truth; you simply lost, nobody cheated you,” she said.

De Lima said that she was dismayed of what Tolentino has become as he continues to muddle on the “endless tirades” against her.

“He continued to spend millions upon millions of his resources because he was hoping to please his new master. Nakikisawsaw na rin siya sa walang-humpay na paninira sakin (He’s also dipping into this endless tirade against me),” she said.

“I am dismayed at what he has become,” she said.

Citing reliable sources, the detained senator claimed that Tolentino intended to withdraw his electoral protest right after the first week of the ballot recount before the Senate Electoral Tribunal.

“He had hoped to find something that can back up his claim that he was cheated but he found none,” she said.

“You and I know that the longer you drag this baseless protest, the more expensive it is for you. Lucky for you, you have the resources to fund your protest,” she added. /jpv