Argentina ballet dancers protest by performing in the street 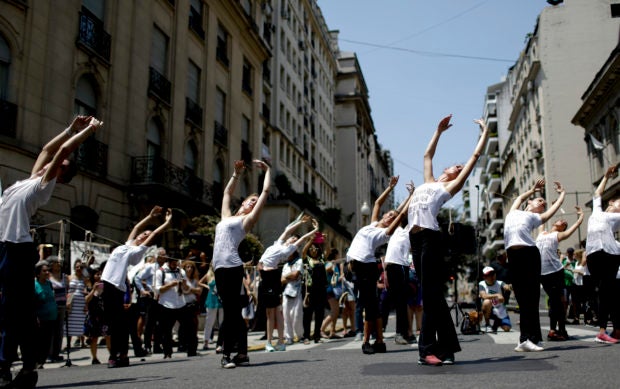 Ballerinas dance in an open-air performance to protest government funding cuts, in Buenos Aires, Argentina, Thursday, Feb. 1, 2018. About 80 dancers, choreographers, and other workers of the state-funded National Ballet of the Dance lost their jobs in December under government austerity measures. (AP Photo/Natacha Pisarenko)

BUENOS AIRES, Argentina (AP) — Ballet dancers took to the streets of Argentina’s capital Thursday, blocking traffic but causing onlookers to break into cheers and applause as they performed pirouettes to “Swan Lake” in protest of government funding cuts.

About 80 dancers, choreographers, and other workers of the state-funded National Ballet of the Dance lost their jobs in December under government austerity measures.

Protesting dancers stretched and warmed up at the barre amid honking cars before their performance and hung a long rope with ballet slippers on a downtown street.

“Culture, education and health are pillars of a nation and a society,” said Manuela Bruno, 28, one of the troupe’s dancers. “So the cutbacks shouldn’t start there, or perhaps never happen at all.”

“By cutting the ballet, the government is not going to save a lot of money,” said Matias Carugati, an economic analyst with the Management & Fit consultancy. “But the government has to always think: Where should I cut money from? The ballet? Retirees? Public employees? It’s trying to cut from what is less of a priority.”

The measures, however, have stoked unrest in a country with a long tradition of the state providing jobs and benefits. Macri’s government struggled to contain violent protests in December over a pension overhaul bill that also triggered a 24-hour general strike by labor unions.

Meanwhile, Argentines continue to lose purchasing power to a high inflation rate, and many are growing increasingly frustrated with increases in fuel and transportation costs that have harmed Macri’s popularity ratings.

But he warned that if the government backs off its cuts, the overall economy will worsen “and you can then count on even more social activism and protests ahead.”

The elimination of the ballet program shocked many in Argentina’s capital, which is famed for its cultural offerings.

Tango is danced in the streets and halls across the city and is still one of its top exports. Some of the best ballet dancers, opera singers and philharmonic operas have performed at the famed Teatro Colon.

“We’re also talking about culture in general and perhaps in the future, about children who might have had the chance to see the national classic ballet as a potential career option for them,” ballet dancer Margarita Peralta said as she prepared to perform on the street.

“I think this shows that they’re not thinking of present nor future effects.” CC

Read Next
Boat capsizes in Cagayan; woman drowns, 9 others rescued
EDITORS' PICK
Disease expert: Omicron variant may behave like Delta
Palace: Malls, establishments may require customers to use of face shields
This new condo in the South will make you want to turn a new leaf
Smart offers wireless fiber-like speeds to Filipino homes with country’s first 5G Prepaid Home WiFi
Syringes for Pfizer vaccine arriving on December 2 — NVOC chairperson
Legarda: Ending Violence Against Women, a cause for all
MOST READ
Bongbong Marcos to face another disqualification case
Christine Bersola, Julius Babao cleared of cancer after colonoscopy, endoscopy
A Merry Bongbong
Isko Moreno ‘hopeful’ of getting Duterte’s backing as Bong Go withdraws
Don't miss out on the latest news and information.