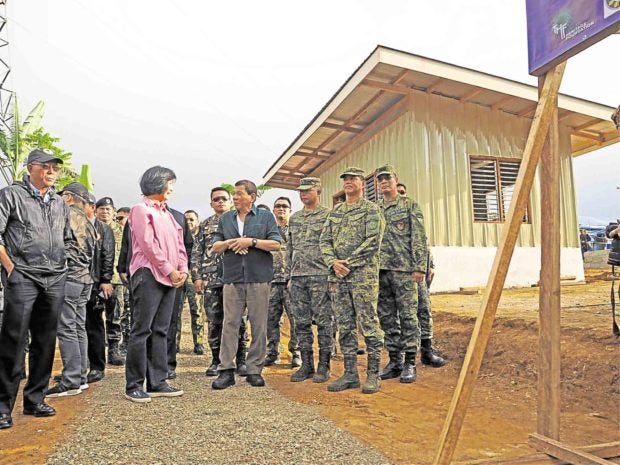 CAGAYAN DE ORO CITY—Moro groups slammed the government’s plan to build a second military camp in Marawi City, saying money intended for this purpose should instead go to the needs of people displaced by the five-month war with terrorists.

Aida Ibrahim, spokesperson for the Marawi evacuees’ group, Tindeg Ranao, said they could not understand why the government was building another camp in Marawi when more than 140,000 people were still staying in 67 evacuation centers and relatives’ houses in Lanao del Sur and Lanao del Norte provinces and Iligan City, unable to return home.

Ibrahim said the number did not include those who left Northern Mindanao at the height of the Marawi siege, when Islamic State-inspired militants took over sections of the city from May 23 to Oct. 17 last year.

President Duterte, during his visit to Marawi on Tuesday, announced the plan to build the military camp in the city.

But Ibrahim said there was “no need” to build another military camp because Camp Ranao, the base of the Army’s 103rd Infantry Brigade under the military’s 1st Infantry Division, had been established in the city.

“His (Mr. Duterte) bias, obviously, is not for the victims of the Marawi siege,” Ibrahim told the Inquirer on Wednesday.

With the establishment of the new camp, a number of families would be asked to relinquish their properties because these would be taken over by the government.

Mr. Duterte confirmed there would be displacements, although it was unclear how many families would be affected by the plan.

The military camp, which would cost the government P400 million, would be built in a 10-hectare area at Barangay Kapantaran, site of the old City Hall complex.

“I’m planning to set a camp here but I will pay you,” the President said during his Marawi visit.

“Whatever they (military) take, we will pay to avoid trouble,” Mr. Duterte said.

Drieza Lininding, chair of the Moro Consensus Group, said putting up another military camp in Marawi would instill fear among displaced Maranao.

“It is a way of suppressing their right to speak out against human rights violations they and their families experienced during the siege,” Lininding said.

He said money intended for the military camp would have been best spent on evacuees’ needs so they could “get back on their feet.”

He said some of the lots inside the reservation area had been issued land titles by the Department of Agrarian Reform  and the Autonomous Region in Muslim Mindanao government.

But many Marawi residents did not own titles to areas they had come to know as their own, said Zia Adiong, spokesperson for the Lanao del Sur crisis management committee.

Adiong said this was the reason why Task Force Bangon Marawi stopped asking for land titles from evacuees as a requirement for them to receive houses in temporary relocation areas.

He said families housed in relocation sites would eventually return to their properties inside ground zero—the area spanning 24 villages where most of the fighting occurred during the siege.

Adiong said residents in 36 villages outside ground zero had already returned to their communities.

Marcelino Escalada, NHA manager, said more than 500 families had moved into the Sagonsongan resettlement area. The NHA, he said, would turn over 1,149 units to displaced residents by March.