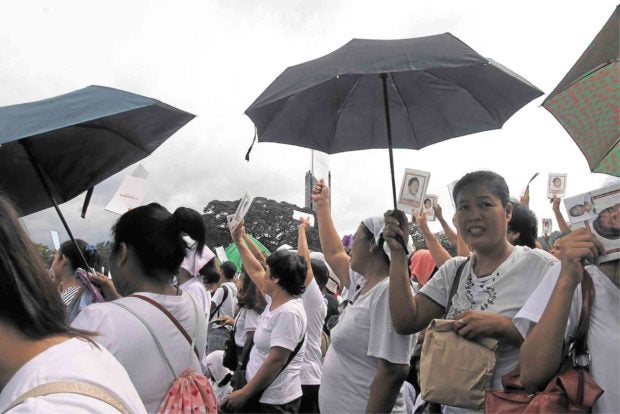 Pamphlets bearing a photograph of the late strongman Ferdinand Marcos are displayed during the assembly of One Social Family Credit Cooperative at the University of the Philippines campus in Los Baños, Laguna. —KIMMY BARAOIDAN

SAN PEDRO CITY — The Cooperative Development Authority (CDA) said it found grounds to dissolve a cooperative that lured thousands to become its members by promising them a share from the controversial Marcos wealth.

CDA Chair Orlando Ravanera said the agency resolved to revoke the permit and shut down One Social Family Credit Cooperative, the group behind a big pro-Marcos assembly held at the University of the Philippines Los Baños (UPLB) last year.

The CDA earlier suspended the cooperative, which was registered only on May 4, 2017, after Sen. Ferdinand “Bongbong” Marcos Jr., the son of the late strongman Ferdinand Marcos, himself called it a scam.

“[The CDA] is now on the dissolution process against One Social Family Credit Cooperative after an investigation was conducted about the anomalous gathering (or) assembly,” Ravanera said in an e-mailed response to the Inquirer’s query on the status of its investigation.

“Its identity has already been put in dubiety for its unwarranted act of proliferating unscrupulous idea—distribution of Marcos wealth,” he added.

On Sept. 23 last year, thousands of people ferried on rented jeepneys and vans showed up on UPLB campus carrying pamphlets that featured the “achievements” of the late dictator.

Those in the crowd said they each paid P30 for the pamphlet and P10 as fee to attend the gathering, where the cooperative’s chair, Pedro Destura Jr., announced that they would begin giving away millions of pesos and gold bars.

Ravanera said an investigation by CDA lawyers and specialists found out that One Social Family claimed itself a “conduit” for the wealth distribution based on an “unverified Letter of Instruction” supposedly from the Marcos family.

“Even assuming arguendo (for the sake of argument) that the officers of [One Social Family] have the genuine conviction that there is realism in their cause, in legal parlance the same remains a falsity,” Ravanera said.

It also turned out that One Social Family’s share capital came from a single member of its board of directors, the reason it failed to present any record of official receipts or subscription agreements with cooperative members.

The CDA said One Social Family violated a number of provisions in the Philippine Cooperative Code of 2008, among these obtaining its registration “by fraud” and existing for “illegal purpose.”

The CDA said it would coordinate with the National Bureau of Investigation to run after people behind the group.