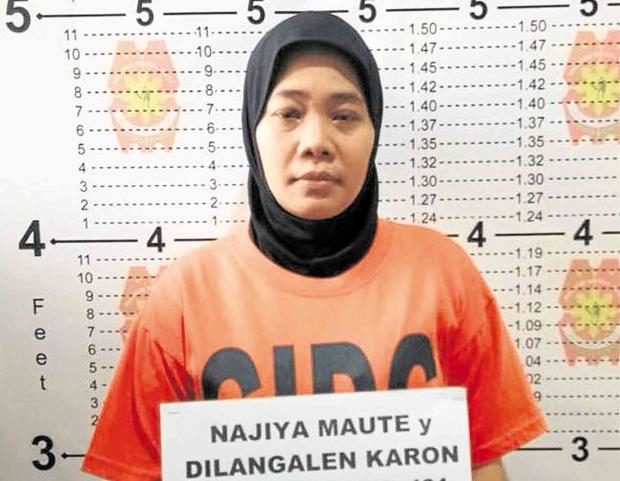 Najiya Karon-Maute was the widow of Mohammad Khayyam Maute, one of the Maute brothers who led the siege of Marawi City on May 23, 2017. (Photo from CIDG-ARMM)

The Department of Justice (DOJ) has released for further investigation the wife of one of the slain leaders of the Maute terror group.

In its inquest resolution made public Wednesday, the DOJ said the complaint of rebellion against Najiya Dilangalen Karon-Maute is not proper for inquest but a preliminary investigation.

A suspect undergoes an inquest proceeding if arrested without a warrant. A warrantless arrest is allowed under the rules set under the Rules of Criminal Procedure.

Based on the complaint filed by the Philippine National Police-Criminal Investigation and Detection Group (PNP-CIDG) and the Armed Forces of the Philippines-The Judge Advocate General (AFP-TJAG), Najiya should be prosecuted for rebellion for aiding members of the Maute group.

Authorities based their complaint on the testimony of a certain Martino Elyana, who was abducted in Padian, Marawi City. Elyana said he saw Najiya and her husband Mohammad Khayyam “Otto” Maute bringing food to members of the group at the Bato Mosque on June, 2017. Elyana said he escaped the Maute lair on July 2017.

The DOJ Task Force Marawi chaired by Senior Assistant State Prosecutor Peter L. Ong said aside from the statement of Elyana, the military and the police failed to present additional evidence to support the allegation.

“However, aside from the statement of Martino Elyana as to the acts committed by the respondent at time he was held captive, complainants did not present any other evidence against the respondent,” the DOJ resolution stated.

The DOJ added that the allegations against Najiya were committed seven months prior to her arrest “thus rendering this case not proper for inquest but for regular preliminary investigation.”

“Besides, at the time respondent was arrested on Jan. 23, 2018, there is no evidence or even allegation that she was committing, about to commit, or has just committed an offense,” the DOJ added.

The DOJ also noted that Elyana, while he affirmed what has happened when he was abducted, he changed the date of his abduction during clarificatory questioning by the DOJ prosecutors.

Najiya Maute was ordered to submit her counter-affidavit on Feb. 14, 2018. /jpv