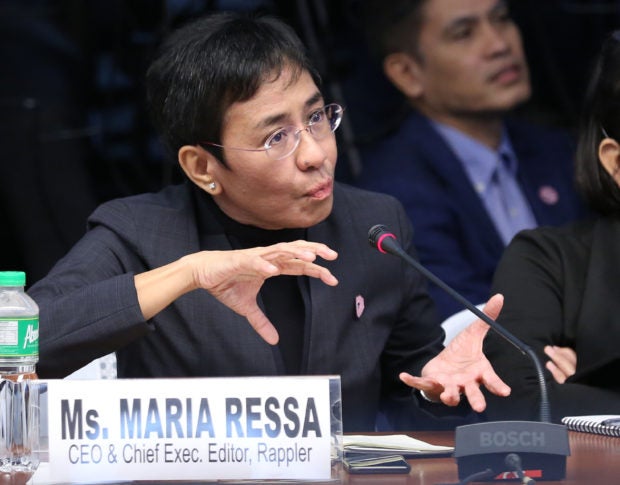 Rappler chief executive officer Maria Ressa on Tuesday said her social media team had traced the spread of fake news after she was attacked with an average of 90 hate messages per hour in October 2016 after the online news site published a story on fake social media accounts.

“By mid last year, we had 12 and a half million accounts being part of it,” Ressa said at the resumption of hearings on fake news by the Senate committee on public information.

As an example, she cited the account of a certain Sally Mathay that reposted wrong information via cut-and-paste.

“If you look at the websites and the groups of where she posts disinformation or what she wants to post, you can see the combination of pages,” Ressa said, adding that it was how an “ecosystem” of fake news was created.

“You can see both the Duterte campaign pages and former Sen. Bongbong Marcos coming together here,” she said.

Ressa said Rappler took part in a study looking at “patriotic trolling” — a state-sponsored online hate and harassment campaign “to silence and intimidate.”

“Social media provided cheap armies to potential authoritarians and dictators to control and manipulate public opinion,” Ressa said, citing the study that is set to be released in the next few months.

She did not provide details of the study, but said it mirrored the findings of a survey of 65 countries released last November by the US-based Freedom House that showed China and Russia were flooding social media with lies and disinformation rather than seeking to control them.
Trolls followed three steps to do this in the Philippines, she said.

As shown in the case of Sen. Leila de Lima, a staunch opponent of the President now detained on drug charges, Ressa said the trolls first attacked the credibility of the target.

“You allege corruption and then you repeat that exponentially because if you say a lie 10 times, truth can catch up. But if you say a lie a million times, that becomes the truth,” she said.

Ressa said the second step was to use sexual violence as this “inflames biases, fuels misogyny and then degrades the target as a sexual object.”

And the last step was to directly attack the target, citing her own experience with the spread of the #ArrestMariaRessa campaign.

Ressa said social media was being used to manipulate opinion in the Philippines because the country was “actually the top country that goes online globally” with 97 percent of Filipinos online also on Facebook.

Ressa said her staff had mapped the network of the purveyors of fake news, which has become much more systematic.

She said it was “consistent in its approach and it built off on the social media [election] campaign team and it was weaponized in July” after Mr. Duterte took office.

She said some governments had sought to “silence dissent” through the proliferation of fake news, flooding social media with hate messages.

Rappler, which the President has called a “fake news outfit,” is battling the revocation of its license by the Securities and Exchange Commission for allegedly violating the constitutional restrictions on foreign control of mass media in the country.
Resisting press restrictions

Ressa joined other journalists, bloggers and even the government’s communications office to resist suggestions to rein in social media.

Presidential Communications Operations Office Undersecretary Lorraine Badoy, who also spoke at the Senate hearing, asked whether statements by Ressa, whom she described as a “very fierce opponent of the President,” be accepted “hook, line and sinker.”

“I just want it for the record that it cuts both ways. This is not the sole crime of pro-Duterte bloggers,” Badoy said. —With a report from the wires