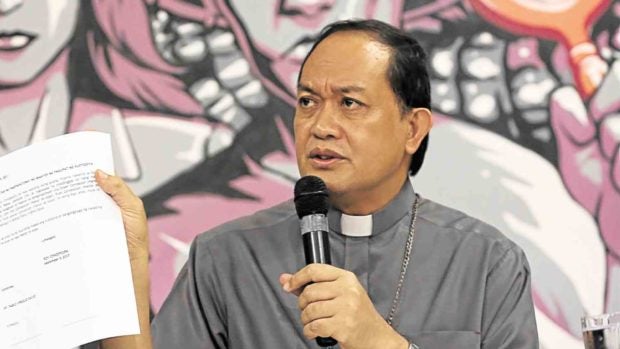 ANGELES CITY — A senior Catholic bishop on Tuesday called on educators to challenge the “myths” being propagated by government officials about drug dependents and people involved in the narcotics trade.

Caloocan Bishop Pablo Virgilio David, vice president of the Catholic Bishops’ Conference of the Philippines (CBCP), also said the people behind the death squads killing drug suspects gangland-style should be hunted down and jailed in the third wave of the police antinarcotics campaign “Oplan Tokhang.”

Speaking at a conference in Angeles City on the “Amoris Laetitia” (The Joy of Love) apostolic exhortation of Pope Francis organized by the Association of Catholic Universities of the Philippines (Acup), David sought to shield young Filipinos from what he called “myth and stupidity” that government officials were saying about drug dependents.

David called Acup educators to challenge government officials’ claims that “addicts are not humans” and “criminals could not be reformed.”

Such statements, he said, are “not science-based and assault fundamental Christian values on life.”

“The Bible’s vocabulary for the poor is back to widows and orphans and a lot of parentless children and families have become dysfunctional,” David said.

“I am confronted every day by families in flight. I’m reminded of the Holy Family in flight, of being pursued by Herod, of the murder of the innocents,” he added.

The Philippine National Police relaunched Oplan Tokhang on Monday, with PNP Director General Ronald dela Rosa saying the third edition of the campaign would not be bloodless but only less bloody.

In an interview with the Inquirer after his speech, David said the PNP should hunt down and jail the motorcycle-riding gunmen behind thousands of killings in the government’s war on drugs.

“I do not call them police death squads. I’m referring to the [masked gunmen], the
[motorcycle-riding gunmen], unidentified assailants … I don’t know what to call them … vigilantes. They’re all over,” he said.

Last September, David said he did not believe Dela Rosa’s statement that the PNP had no policy to kill drug suspects.

The bishop said his diocese had made many attempts to get statistics on drug-related killings from the PNP.

“If they cannot disclose what they call ‘classified information’ to the Supreme Court, what more to the Church?” David said.

During oral arguments last year on a case challenging the war on drugs, the Supreme Court directed the government to submit all records of drug killings, including cases under investigation, but the administration refused, saying the records were classified information.

During his speech to the Acup conference, David read a text message from one of his parishioners who had a relative who entered a drug rehab program supervised by the Diocese of Caloocan.

The parishioner expressed fear of the death squads, although police officers who conducted Tokhang were in uniform and recorded their operations.

“These past few days, it is not the police who are killing people during legitimate operations. The death squads are the ones killing the people [whose names appear on] drug watch lists. Imagine the effect of these killings on families,” David said.

“If the members of these death squads are criminals, too, then they should be pursued and the cases against them should be resolved,” he added.

Sharing his thoughts about the relaunch of Oplan Tokhang with the Acup leaders, David said: “Good heavens, you have barely washed the blood, the blood that [has flowed] from Tokhang Parts I and II. You barely accounted for the lives, and you would not accept one single case as extrajudicial killing and then you launch it again. Let’s not fool each other. You never unlaunched it.”

In his speech, David never referred to President Duterte, the architect of the war on drugs.