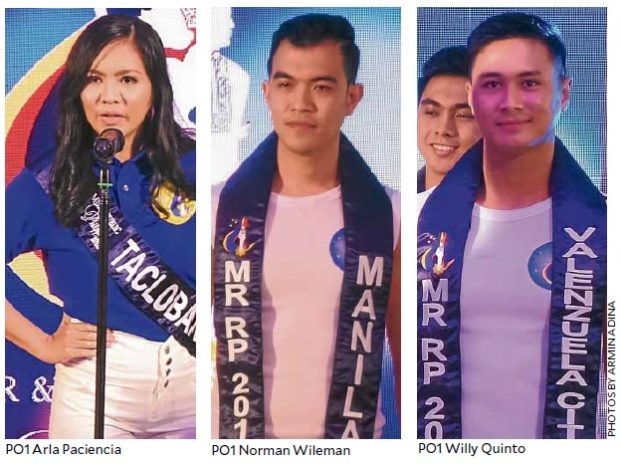 Call it a bid to literally burnish the image of the Philippine National Police.

Aside from conducting “Tokhang” antidrug operations, police officers also reach out to the community by ensuring security in top tourist sites in the country, the Police Community Relations Group director, Senior Supt. Rhodel Sermonia, said of the three officers competing in tonight’s Mister and Miss Republic of the Philippines contest.

The decision to field three police officers was meant to further promote the “TOP COPS” program, or the Tourist Oriented Police for Community Order and Protection, Sermonia said.

Tourism is one of the advocacies of the beauty tilt, along with promoting culture, heritage and education, he pointed out.

The beauty contestants from the PNP are PO1 Willy Quinto, who was proclaimed “Guwapulis 2016” in a contest hosted by ABS-CBN’s morning show “Umagang Kay Ganda.”

With all their heart

PO1 Arla Paciencia, who bagged the top prize in the search for “Ganda Pulis 2017,” is representing Tacloban City.

Joining the pageant was not just a way “to promote a good image” among the police, Sermonia said.

“In a real sense, we want (our three contestants) to show the good side of a police officer—(who are) capable of protecting and serving the people with all their heart. It’s not just an image. The sincerity must be there,” he explained.

Although the three were surprised at the move to field them in the competition, Sermonia said he hoped that their participation in the contest would serve as an enriching experience for them.

Sermonia’s office serves as the bridge between the Philippine National Police and the community, and partnering with nongovernment organizations is part of this.

“It is very important to reach out to the community. Because if the community believes in the PNP and supports the PNP, then half our job is done,” he said.

Quinto, who already has a national title under his belt, may have an easy sail to one of the titles at stake since other contenders have only regional and local pageant experience.

The beauty contest is revival of the old Miss Republic of the Philippines pageant, which used to send a Philippine representative to the Miss World pageant. After a 39-year hiatus, it was revived in 2015 by its current organizers.

This year, the pageant opened its doors to male participants.

The winners stand to take home scholarship packages worth up to P5 million.

The 2018 Mister and Miss Republic of the Philippines coronation ceremonies will be held tonight at the Sofitel Philippine Plaza in Manila.