Gun slays up in Zamboanga City despite martial law 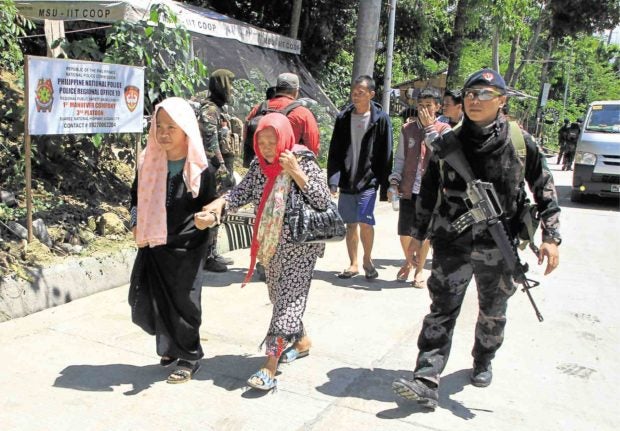 Police checkpoints, like this in Iligan City, have been put up in several areas in Mindanao to stop the movement of terror groups after martial law was declared on the island last year. RICHEL V. UMEL

ZAMBOANGA CITY — The declaration of martial law in Mindanao after terrorists laid siege to Marawi City last year has failed to stop gun-related attacks in this city, prompting Mayor Maria Isabelle Climaco-Salazar to order the police to probe deeper into the motives behind each murder reported here.

“My directive is [for the police to] also look deeper into the data of every shooting incident,” Salazar told the Inquirer. “They [police] must look into the motives to [solve] the case. They must know [the] background of all victims. What were the reasons why they were shot and killed?”

Police reported that at least 10 people, including a policeman and a teenage girl, were killed by unidentified men in the first three weeks of January.

Although the carrying of firearms among civilians is banned under martial law, armed men managed to evade government inspections and continued to prowl the city, at times attacking residents inside their homes, police said.

Senior Insp. Sheila Tubo-Chang, spokesperson for the Zamboanga City police, said among the latest victims were a couple in the village of Upper Calarian, who were shot inside their house on the night of Jan. 18.

Three days earlier, Erwin Agustin, 42, an employee of the Zamboanga City Water District, was attacked by unidentified gunmen while passing by Estrada Drive at Barangay San Roque here on his way to work.

“This is very disturbing because we, [licensed] gun holders, are [strictly observing] the policies of the government [on carrying of firearms],” said Marlon Simbajon, a local radio reporter.

Simbajon lamented that while licensed gun holders followed the government’s licensing process, some people could just keep firearms, shoot at anybody and easily get away with crime.

Chang said police could not address all issues pertaining to criminality in the city, even with martial law imposed in Mindanao.

She cited the case involving PO1 Alden Ibno Sahiron, who, along with another man, went to the house of Bernard Ybañez in Barangay Tetuan on Jan. 11 and shot the latter. Ybañez survived the attack but his companion, Lindy Abbuh, was killed.

Other victims of gun attacks this month included tricycle driver Basir Masihul, 34, who was shot dead in Barangay Recodo on Jan. 1; Sadikal Sarail Apostol, 30, an overseas worker who was attacked and killed in Barangay Sta. Catalina on Jan. 4; Angelica Arquiza, 18, a Grade 12 student who was shot dead while sleeping inside the family’s house in Barangay Bunguiao on Jan. 4; PO3 Michael Sacandal Tan, 39, who was attacked while on his way home to Barangay Zone 4 after serving a warrant on Jan. 8; and Sattar Jaman Jaji, 56, who was killed while buying medicine in Barangay Sta. Barbara on Jan. 11. —Julie Alipala