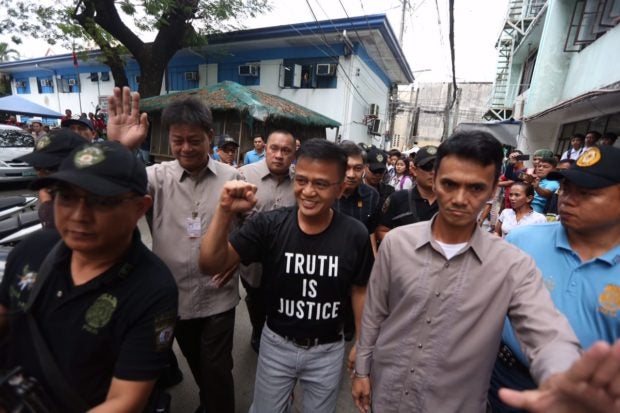 Former Bureau of Customs (BOC) Commissioner Nicanor Faeldon has again urged the Supreme Court (SC) to immediately act on his petition to nullify the arrest order issued by the Senate against him.

The former BOC Chief has been transferred to the Pasay City Jail on Tuesday morning following an argument with the senators during the resumption of the hearing on the P6.4-billion shabu shipment.

“If there is still any lingering doubt in the minds of the Honorable Justices of this Court, that the provisional reliefs prayed for by the Petitioner are absolutely necessary under the premises, then Respondent Sen. [Richard] Gordon’s latest public display of bullying, pomposity and utter abuse of power, should be more than enough,” Faeldon said in his very urgent motion to resolve, which was submitted Tuesday morning.

However, he failed to secure immediate relief from the SC as it was not included in the agenda during its regular weekly en banc (full court) session.

The newly appointed deputy administrator for operations of the Office of Civil Defense (OCD) on Monday asked the Supreme Court to nullify the order of arrest and detention issued by the Senate last Sept. 7, 2017. /jpv

Read Next
EPD’s 4th most wanted arrested after 7 years in hiding
EDITORS' PICK
High inflation: Your P1 is now worth only 87 centavos
UK’s Boris Johnson will resign, BBC reports
Geek out at TOYCON 2022 powered by Smart Signature
House energy committee chair Arroyo bats for cheap electricity
High-risk pregnancy: Reducing your risk is in your hands
Unemployment rate up to 6% in May
MOST READ
Suspect in grisly killing of missing woman in Bulacan arrested
Hong Kong suspends flight bans as it eases COVID-19 rules
Kim Atienza’s daughter flaunts bikini body in response to critics of her ‘revealing photos’
Cop slain in Isabela ambush
Don't miss out on the latest news and information.