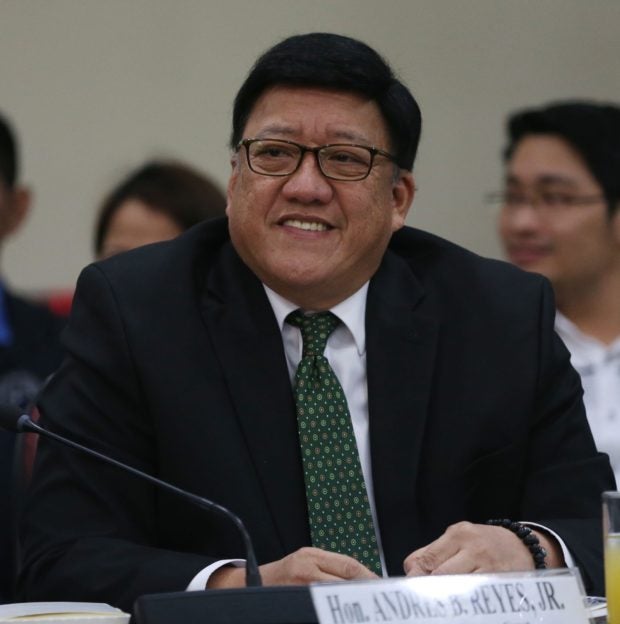 Chief Justice Maria Lourdes Sereno allegedly said this to Supreme Court Associate Justice Andres Reyes Jr. as she scolded him for setting up a courtesy call with President Rodrigo Duterte when he was still the presiding justice of the Court of Appeals.

Reyes recounted the incident during the House justice committee’s 11th hearing on the impeachment complaint against Sereno. He said she berated him because his letter to Mr. Duterte talked about discussing problems in the judiciary.

His statements concerned the accusation of lawyer Lorenzo Gadon that Sereno “betrayed the public trust” when she tried to prevent the justices from attending the Aug. 23, 2016, courtesy call.

Reyes said Sereno called him to her office after learning about the plan to go to Malacañang and meet the President.

“She was not smiling at me and she said, ‘I don’t like your letter. Your letter is insulting to me and the en banc. You make it appear we are not doing anything here in the Supreme Court,’” he said.

Reyes said he apologized for bypassing the high court, only for Sereno to supposedly tell him: “The President is a loudmouth … He says just about anything, and whatever he says, you won’t be able to butt in and do anything.”

While the courtesy call pushed through, he said he amended the letter to say the meeting was for the presentation of the commemorative coin and stamp for the appeals court’s 80th anniversary.

But Sereno supposedly directed him to prepare a letter “explaining my actions as presiding justice,” because “the en banc is not happy” with the courtesy calls made by the justices of the appeals court and Sandiganbayan.

Associate Justice Teresita Leonardo-de Castro said Sereno did propose to the justices sitting in full court that a show cause order be issued against the justices who visited the Palace.

But, De Castro said “nobody wanted to do that because it would just worsen the situation.”