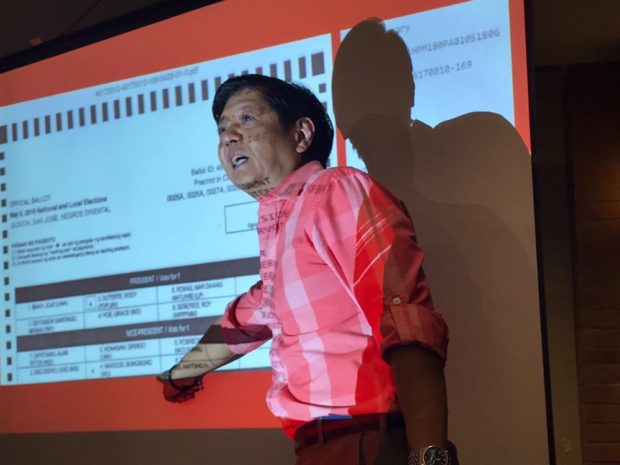 Former Sen. Ferdinand Marcos Jr. on Monday questioned the presence of “mysterious squares” on the soft copies of some of the ballots used in the May 2016 elections, claiming these were proof of massive cheating to ensure the victory of Vice President Leni Robredo.

In a news conference, Marcos accused the Commission on Elections (Comelec) and its technology partner, Smartmatic, of conniving with Robredo in a supposed “Marcos-specific” plot to prevent him from occupying the country’s second highest elective office.

He showed to the media some of the ballot images which the Supreme Court, acting as the Presidential Electoral Tribunal (PET), provided to them as part of his electoral protest questioning Robredo’s win.

“Clearly, these ballot images are not one-to-one representation of the actual ballots,” he said. “This could be the reason why they had been hiding the ballot images from us.”

Vic Rodriguez, Marcos’ lawyer, said the efforts to alter the results of the automated balloting only targeted his client and that the evidence they had discovered was “very telling.”

According to Marcos, “all” of the ballot images provided to them by the PET had squares and that the vote summary revealed “undervote” for the position of vice president even if the ballot showed that he had actually received a vote.

He, however, could not answer how many soft copies of the ballots his camp had already received from the PET.