Senate sends Faeldon to Pasay jail after tussle with Gordon 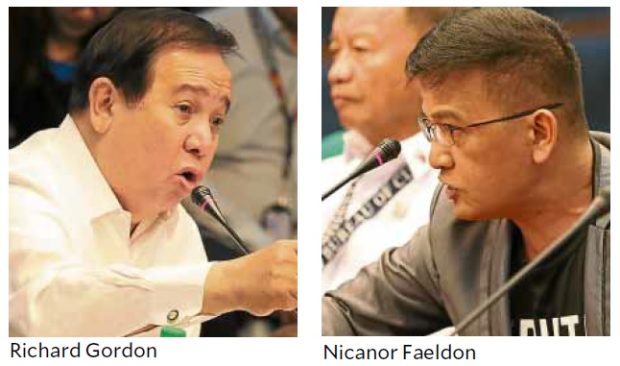 The Senate blue ribbon committee on Monday ordered the detention of former Customs Commissioner Nicanor Faeldon at the Pasay City jail after he traded barbs with panel chair Sen. Richard Gordon over, among other matters, parties that Faeldon supposedly held in his Senate detention cell.

Finally appearing at the hearings on alleged corruption in the Bureau of Customs (BOC), Faeldon failed to hurdle the contempt citation imposed on him by the Senate four months ago.

“(Faeldon) will now be remanded to the custody of the Pasay City jail upon order of commitment by the Senate president, and it was agreed upon unanimously,” Gordon said.

Faeldon, now deputy administrator of the Office of the Civil Defense, figured in heated exchanges with Gordon twice during the 2-hour long hearing, with the senator calling him “arrogant” and “defiant” and, at one point, telling him he would have a “long vacation” in the Senate.

The senators “unanimously” declared that Faeldon would “remain charged with contempt,” Gordon said hours after the hearing.

Faeldon was sent back to the Senate basement, where he had been staying since September last year after he was cited in contempt by the committee for refusing to testify and appear at the hearings.

Under threat of being transferred to the Pasay jail if he continued to refuse to attend the hearings, Faeldon showed up before the start of the session and immediately went to Gordon.

But he immediately tangled with Gordon when the senator mentioned that during his detention in the Senate, the committee had allowed him to hold parties there attended by his father and relatives, among others.

Gordon also claimed that the Senate had spent about P400,000 for Faeldon’s stay in the Senate premises.

Responding to Gordon’s statement, Faeldon said he did not agree with the rest of what the senator said.

“My father has been long dead. I never had a party with my father here in the Senate or with anybody,” Faeldon said.

“You are exaggerating,” he told Gordon, who shot back: “Don’t tell me I’m exaggerating. You have no right to tell me anything.”

Faeldon said he attended the hearing because it was now his duty as a government employee.

“Not that I expect that you will lead this committee to find out the truth. You are [very] far from getting that, your honor,” he said.

Gordon then told Faeldon he would remain in contempt.

“I’ve no problem with that, your honor,” Faeldon replied.

The exchange became more heated after Faeldon said he had told Gordon since September that he was ready to answer questions of senators through an affidavit. He said the senators did not respond to his offer.

Gordon cut off Faeldon, but the latter continued by saying the senator was “monologuing and lecturing.”

“This is the reason why I do not want to attend here because you’re not interested [in] the truth,” Faeldon said. “You’ve been monologuing even your colleagues.”

Gordon turned off the microphone after that exchange.

The two men bickered again when Gordon asked about whether justice had been given to Customs Deputy Commissioner Art Lachica, who was killed in an ambush and why Faeldon did not investigate the latter’s death.