Supreme Court Associate Justice Teresita Leonardo-de Castro on Monday accused Chief Justice Maria Lourdes Sereno of “passing the blame” on the alleged delay in the release survivorship benefits for the spouses of justices and judges.

During the 11th hearing of the House of Representatives justice panel on the probable cause of the impeachment case against the top magistrate, De Castro said that the alleged delay in the 29 applications for survivorship benefits was already referred to and was being discussed by a technical working group (TWG).

The matter, she added, was not discussed by the SC en banc because it was not part of the agenda approved by Sereno.

“Hindi malalagay sa agenda dahil nandun na sa TWG (It won’t be placed in the agenda because it’s already in the TWG). If you will look at the composition of the committee, yung tatlo po dun malapit sa (three of them are close to the) office of the chief justice,” De Castro said.

(For me, no one in particular approached me, but sometimes when there’s a party, there’s someone who will say how the survivorship benefits were taking so long… Then Chief would say it was already with the TWG, that’s CJ’s answer for those asking. She was passing the blame to the TWG; for me, I do not know that it was that delayed.)

When asked why the other justices waited for the TWG before resolving the issue, De Castro answered: “But the matter was not brought up to the en banc.”

(I think there was an impeachment complaint already when it was put in the agenda. That’s why en banc was completely clueless why it was delayed.) 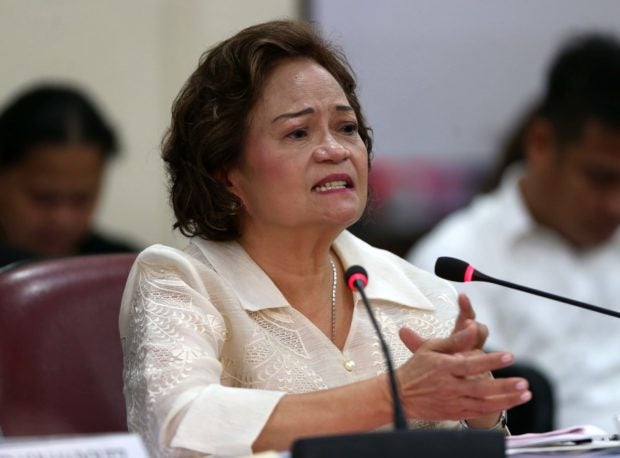 Associate Justice Mariano del Castillo, however, admitted that while he had raised issues before the en banc to speed up the “unusual delay” in the approval of survivorship benefits, he said there had been “no strong opposition” and that the applications had already been processed to this date.

“I did push for an early resolution of that matter because a committee was already formed to reconcile certain conflicting policies on the matter… My position is it was quite unusual length of time that it took the committee to study the matter,” he added.

Sereno was invited to appear at the hearing but she did show up, but her camp had already denied intentionally delaying the approval of the benefits.

Sereno’s lawyers said the applications of those benefits are in the first place required to be decided by the SC as a collegial body.

“The Chief Justice is sympathetic with the plight not just of retirees in the Judiciary, but of the people, who long for an expeditious resolution of their cases,” Sereno’s camp said in an earlier statement.

Lawyer-complainant Lorenzo Gadon is accusing the top magistrate of culpable violation of the Constitution, betrayal of public trust, corruption and other high crimes. /je