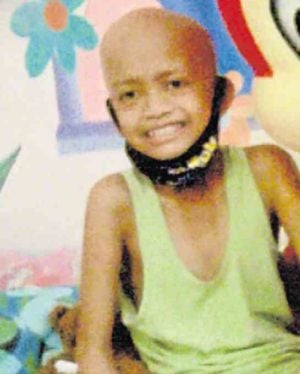 “We were told to check on him because he slept long hours at home and did the same in school and yet, there was nothing wrong with him. He did not have any complaints except for headaches that would go away whenever he took some paracetamol,” his 45-year-old father Robert, a resident of Lucena City, told the Inquirer.

Doctors who examined the teenager found a tumor in the center of his brain, leading to an operation at Philippine General Hospital on Jan. 20, 2016. But a year later, another tumor grew on the left side of Nathaniel’s brain.

“Doctors warned this time that a second operation would be dangerous so he had to undergo six to seven cycles of chemotherapy,” said Robert, a soft drink distributor who resigned from his job to help his wife, Aileen, care for their son.

Read Next
DID YOU KNOW: 918 HIV cases recorded in October 2017
EDITORS' PICK
PH logs 665 new COVID-19 cases, lowest since July 2020
Gov’t eyeing COVID-19 vaccine booster for essential workers, indigents by Dec. 10
Villar Group gears up for AllValue Shopping Party on Dec. 3; around P 1-million promos and discounts up for grabs
Omicron poses ‘very high’ global risk, countries must prepare–WHO
A delightful blessing!
Legarda: Ending Violence Against Women, a cause for all
MOST READ
Quiboloy warns of ‘much worse than Omicron virus’ if his ‘persecution’ is not stopped
Bongbong Marcos’ conviction in tax case not a crime involving moral turpitude — lawyer
Omicron poses ‘very high’ global risk, countries must prepare–WHO
Marcoleta defends pol ads on ABS-CBN
Don't miss out on the latest news and information.