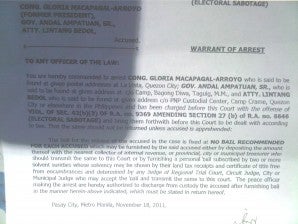 A copy of the warrant of arrest issued against former president Gloria Macapagal-Arroyo and two others is signed Pasay RTC Judge Jesus Mupas of Branch 112. MIKO MORELOS/INQUIRER

MANILA, Philippines—A warrant of arrest has been issued against former president Gloria Macapagal-Arroyo on charges that she rigged elections in 2007, officials said Friday.

Judge Jesus Mupas of Pasay regional trial court 112 issued the arrest warrant after the case was raffled off to him earlier in the day, Radyo Inquirer 990AM reported Friday.

The warrant was delivered to the National Bureau of Investigation on orders of Judge Mupas, his staff member, Celia Domingo, said.

“There is a warrant of arrest. She (Ms Arroyo) will be apprehended and she cannot leave the country,” she added.

The Supreme Court earlier Friday upheld Arroyo’s right to travel but the warrant of arrest now effectively bars her from leaving.

Justice Secretary Leila de Lima said the government would “exercise fairness and partiality and everything Arroyo is entitled to under the Constitution”.

“It is our desire that truth and accountability prevail and the Filipino people are given the justice they truly deserve,” De Lima said.

Arroyo denies wrongdoing and accuses the government of violating her rights by stopping her from leaving the Philippines for medical treatment abroad.

The former leader was recovering in the hospital since her failed attempt to leave the country Tuesday, and it was doubtful she would be immediately hauled to jail given her medical condition. With Agence France-Presse and Associated Press