Former maintenance provider of MRT 3 says such sad incidents could have been avoided
Philippine Daily Inquirer / 05:54 AM January 27, 2018 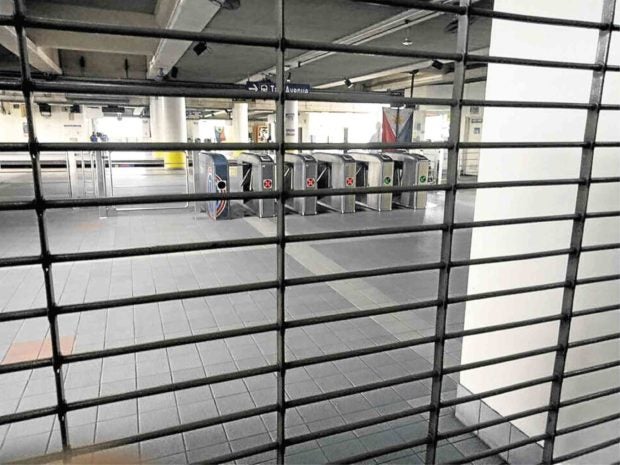 The southbound portion of the MRT 3 Santolan station is closed after a train caught fire on Friday afternoon.

The operation of the Metro Rail Transit 3 (MRT 3) was disrupted on Friday afternoon after a fire ensued inside a southbound train, forcing it to stop between GMA-Kamuning and Araneta Center-Cubao stations  in Quezon City.

Department of Transportation (DOTr)-MRT 3 media relations officer Aly Narvaez said smoke was reported coming out beneath a passenger seat near the door of one of the coaches of the southbound train around 1:42 p.m.

Narvaez, quoting the MRT 3 Control Center, said the smoke came “probably from the electronic components under the seats.”

The train was stopped. Passengers inside the coach panicked and used the emergency switches to open the doors. Responding security guards evacuated 500 to 600 passengers, who walked on the rail tracks toward Cubao station.

A fire truck responded and doused the portion of the train that caught fire. The train was later brought to the MRT depot for further diagnosis.

The MRT 3 immediately limited its operations from Shaw Boulevard to Taft Avenue stations for both southbound and northbound lanes after the incident. Normal operations resumed around 2:46 p.m.

MRT 3 director for operations Michael Capati later went to the depot to inspect the affected coach.

Capati said the fire took place beneath the seat where the regulator board lies. The regular board operates when the train accelerates.  He added that there was no flame and the smoke itself was “not life-threatening.”

“We apologize to the public for the incident,” he added.

But Capati said the MRT management could not guarantee that there would be no more similar incidents, due to the aging parts of the train.

He said the most urgently needed spare parts for the trains will arrive in February.

In September 2017, an MRT 3 train stopped and offloaded passengers near Santolan-Annapolis station after one of its seats caught fire.

Reacting to the latest incident, the former maintenance provider of MRT 3 on Friday called on the DOTr to stop pointing fingers and take full responsibility for the problems confronting the MRT 3 daily runs.

In a statement, lawyer Maricris Pahati, legal counsel of Busan Universal Rail Inc., said that instead of blaming their company, DOTr should hold itself accountable for all the troubles it caused when it terminated the service contract of Buri.

“It has come to a point when Buri can no longer remain silent as it is now being blamed by the DOTr for all its setbacks in maintaining the beleaguered MRT 3,” Pahati said.

She said that when Buri’s contract was terminated, it turned over to DOTr a well-maintained and operating MRT 3.

Initially, she said,  the DOTr blamed it on the aging system or parts needing replacement.

“But, it seems DOTr has ran out of excuses and is now putting the blame of the causes of their ineptitude on the previous maintenance provider, Buri,” Pahati added.

Transport authorities had vowed to provide a safer and more reliable train service for long-suffering MRT 3 commuters when they terminated Buri’s contract in November last year.

But Pahati said the DOTr had failed to organize a transition team, composed of experienced rail engineers, to ensure the continuing safety and efficient maintenance of the MRT 3.

All these sad incidents could have been avoided, she said.—REPORTS FROM JEROME ANING AND JULIUS N. LEONEN