P10M worth of shabu found in the bathroom’s ceiling 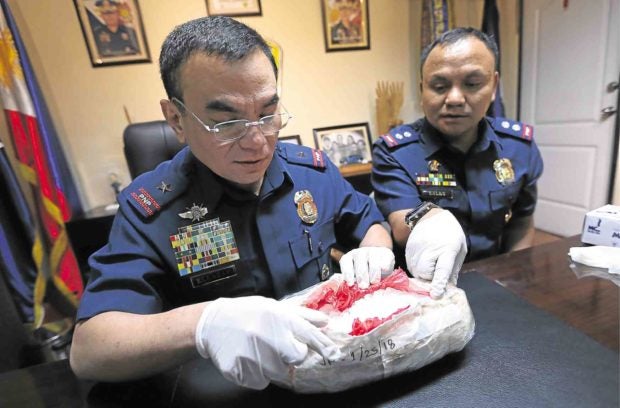 Around P10 million worth of high-grade “shabu” (crystal meth) wrapped in plastic was found on Thursday by tenants in the ceiling of their rented house in Quezon City.

The two tenants, whose identities were withheld for security reasons, turned over around two kilos of the illegal drug to the Quezon City Police District after they discovered it  in their ceiling.

The two tenants were tenants at a house along Antoinette Street in Parkway Village, Barangay Apolonio Samson. They told police that they moved into the house about two months ago.

Chief Supt. Guillermo Eleazar, district director, said the pair noticed that the ceiling’s manhole in the bathroom was open two weeks ago, but decided to ignore it.

Around 9:30 p.m. on Thursday, however, they saw that the same manhole was once again open.

“They also noticed that the shower rod was bent as if someone had stepped on it to enter the ceiling’s manhole. They also feared that robbers may have entered their house,” Eleazar said.

On closer inspection, however, the tenants found a heavily taped red plastic bag in the ceiling.

The two then reported it to the village officials, fearing initially that the bag contained a fetus or something, police said.

As of press time, police were still clueless on how the shabu ended up inside the ceiling.

Eleazar said police would conduct background checks on the house’s owner and previous tenants to trace the origin of the drug.