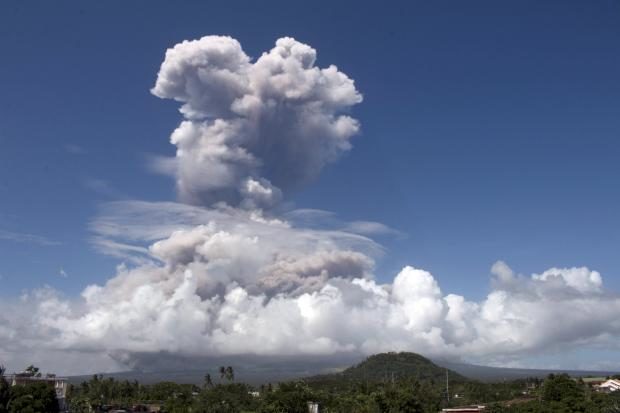 A huge column of ash shoots up to the sky during the eruption of Mayon volcano on Monday, January 22, 2018 as seen from Legazpi City, Albay province, around 340 kilometers (200 miles) southeast of Manila. The Philippines’ most active volcano erupted Monday prompting the Philippine Institute of Volcanology and Seismology to raise Alert Level to 4 at the volcano. (Photo by EARL RECAMUNDA / AP)

The Philippine Institute of Seismology and Volcanology (Phivolcs) recorded the third lava fountaining event at Mt. Mayon this Thursday.

Officials said the episode was smaller compared to the previous ones because the lava fountaining at 8:45 a.m. Thursday measured 150 meters.

It nevertheless produced a 500-meter ash plume towards west-northwest from the crater of restive volcano.

Phivolcs also noted that no rumbling sound was heard when Mayon spewed lava this time.