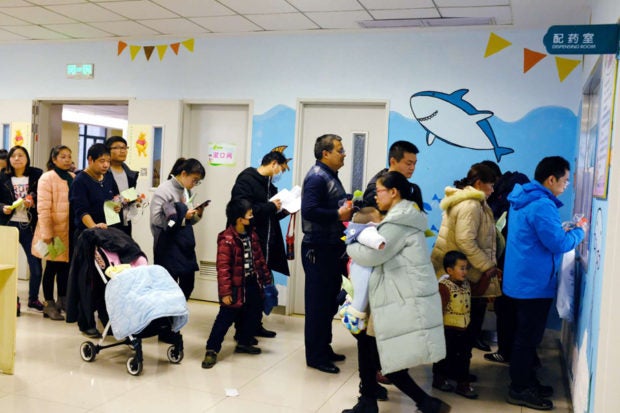 Parents wait in line with their children suffering from flu to get treatment at Wuhan Women and Children Medical Care Center in Hubei province on Sunday. Photo by Jin Siliu/China Daily/Asia News Network

A new wave of bird flu is likely to hit China over the next few months, which could have serious consequences this year due to the high number of cases of human flu in many parts of the country, a prominent scientist warned.

H7N9, which was first reported in China in 2013, is most active between January and March, based on experiences over the past few years, Zhong Nanshan, director of the National Clinical Research centre for Respiratory Disease in Guangzhou, Guangdong province, told Xinhua News Agency.

A mixture of bird flu and human flu could have serious consequences for public health as flu viruses can evolve rapidly and can be transmitted across different species, he said.

More than 1,500 human cases of bird flu have been reported on the Chinese mainland since 2013, including 607 deaths, Zhong said.

The peak season for flu will trail off at the start of the winter school vacation this month, according to the National Health and Family Planning Commission.

Zhong called for members of the public to receive flu vaccines, as it is the best means of prevention, he said.

Li Xingwang, chief expert with the Beijing Ditan Hospital’s Infection Department, told China Daily on Tuesday there is no need for concern as long as precautionary measures are taken.

“The chances of bird flu outbreaks will be greatly reduced if measures are taken such as the closure of live chicken markets and vaccinations for chickens,” he said.

The peak season for flu infection is ending and the chances of simultaneous outbreaks of human flu and bird flu in the following months are low, he said.