Gaming consultant Charlie “Atong’” Ang  has turned  the table on  top officials  of the Philippine Charity  Sweepstakes  Office  (PCSO) after  he has been accused of  allegedly offering to operate the Small Town Lottery (STL) in exchange of  P200  million monthly remittances to the agency.

At a joint hearing in the Senate on Wednesday, Ang confronted PCSO General Manager Alexander Balutan over the latter’s allegation against him.

Ang confirmed that he met with Balutan and resigned PCSO chairman Jose Jorge Elizalde Corpuz in 2016 but denied that he had any “interest” in the operations of STL.

He also lamented how Balutan and Corpuz had treated him during the meeting when he introduced himself as a consultant. 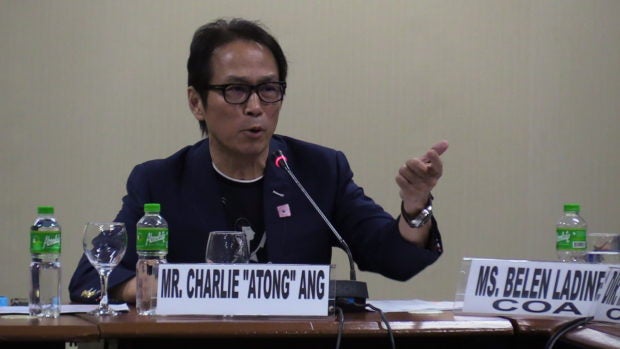 “Consultant of what? Can you show me your ID or your papers? Can you write down kung ano gusto mo (what you really want)? Talagang binastos ako (I was really disrespected),” Ang recalled Corpuz telling him.

(Balutan was just smiling. Of course I was disrespected as well as Sandra, and I answered back. I said I came here not to apply to you, in your STL…)

(Now, I just want to prove here how foolish these two generals are. I told Corpuz I did not come to apply to you, I came just to tell you I was asked to go here so I can be hopefully of help.)

(The reason I did that to him [Corpuz] is because he was disrespecting us. During the time, Balutan was an ally because he wanted to grab the post of Corpuz during those times, that’s why he was just smiling. He was just full of smiles.)

Also during that meeting, Ang said he  advised the PCSO officials  that it should be the one to operate  the STL and not  any private  individuals.