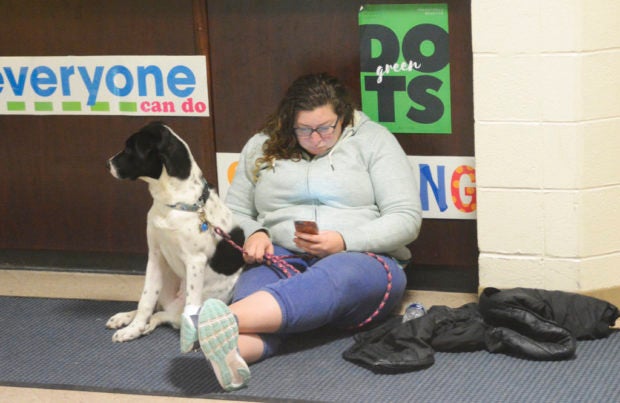 Anna Dale and her dog Poppy at about 2:30 a.m. Tuesday, Jan. 23, 2018, wait for the all-clear at Homer High School during a tsunami alert for Homer, Alaska. The city of Homer issued an evacuation order for low-lying areas shortly after an earthquake hit. (Michael Armstrong/Homer News via AP)

ANCHORAGE, Alaska—Chances of creating a tsunami brought about by the Alaska earthquake was reduced, calming fears of people living in the coastal Alaska, Canada’s British Columbia and the West Coast of the U.S.

This development came after a seismologist claimed the Alaska earthquake was a type that usually produces less vertical motion, which means less chance for waves to build for a tsunami.

That’s according to Paul Earle, a seismologist with the U.S. Geological Survey.

Earle says the earthquake was within the Pacific plate and was a so-called “strike-slip earthquake.”

That’s the type when one side of the fault slides past another fault, like the San Andreas fault in California.

He says that was somewhat unusual because quakes in the area are usually thrust earthquakes where one side goes underneath the other.

He says those are the type that cause more vertical motion and increase the chance for a tsunami.

The Alaska quake was the planet’s strongest since an 8.2 in Mexico in September.

Meanwhile, the earthquake that struck early Tuesday off an island in the Gulf of Alaska has been followed by dozens of aftershocks.

John Bellini, a geophysicist with the U.S. Geological Survey’s National Earthquake Information Center, says there have been more than two dozen aftershocks as of about 6:30 a.m. The biggest aftershock had a magnitude of 5.3.

The earthquake was initially reported as magnitude 8.2, but the USGS has now pegged it at 7.9.

Bellini says as more data comes in, better calculations can be made as to the magnitude. Earthquake waves take time to spread.

The earthquake promoted a tsunami warning that was canceled after a few intense hours, allowing people to return home from shelters.

There were no immediate reports of damage. /jpv