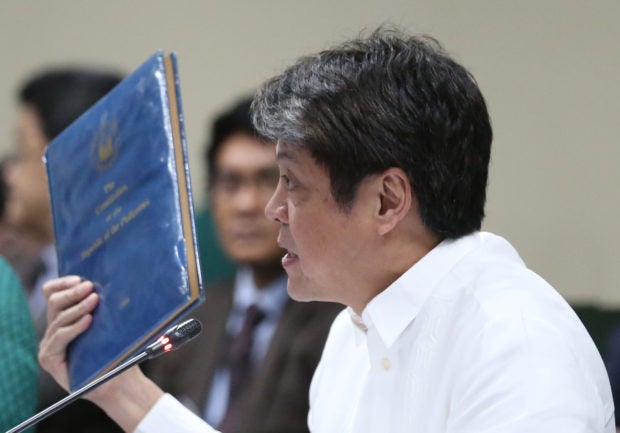 Senator Francis “Kiko” Pangilinan shows a copy of the Constitution of the Republic of the Philippines during the Senate Committee hearing on Constitutional amendments and revision of Codes held at the Senate Building in Pasay City on January 17,2018. (INQUIRER FILE PHOTO/JOAN BONDOC)

Senator Francis “Kiko” Pangilinan warned on Tuesday of a “constitutional crisis” with the House of Representatives’ decision to push through with Charter change (Cha-cha) even without the Senate.

“That will create a constitutional crisis,” Pangilinan, who leads the Cha-cha hearings in the Senate as chair of the committee on constitutional amendments, said in a text message.

The senator was reacting to Speaker Pantaleon Alvarez’s latest statement that the Senate and the House need not convene in a joint session to propose amendments to the 1987 Constitution.

“We don’t have to talk about a Con-ass anymore. We just have to comply with the three-fourth votes of all members. For our part, we will send this to the people [for a vote],” he added.

Pangilinan said it appeared that the strategy was for the House “to force the issue and have the Supreme Court step in and decide in their favor.”

“The administration has bullied the political opposition, its critics, the CJ (Chief Justice), the media, selected business interests & now it wants to bully the Senate,” he lamented.

“If the Senate allows itself to be bullied then, our democracy and respect for the law will be thrown out the window and no one will be safe from the abuses of those in power,” the senator added.

Pangilinan clarified that they were not against Cha-cha per se but said “it must be done legally.”

“And we will not be bullied or rushed into it,” he said.

The senator noted that the last three attempts to initiate Cha-cha during the time of former Presidents Fidel Ramos, Joseph Estrada, and Gloria Macapagal-Arroyo were all thwarted “because the people themselves vehemently opposed it for being self-serving, and meant to benefit only those already in power.”

“The people in their vast numbers mobilized and organized to oppose Charter change is key in stopping this senseless, mad and shameless rush to amend the Constitution,” Pangilinan said.               /kga