Alert level up as Mayon explodes

Two successive 10-kilometer-high ash columns that Mayon belched out at noon sent volcanologists raising the alert at the volcano to Level 4, signifying a hazardous eruption is imminent.

Alert Level 5 signifies a hazardous eruption is under way.

“We expect possibly more explosions and we’re on the alert for stronger ones,” Director Renato Solidum Jr. of the Philippine Institute for Volcanology and Seismology (Phivolcs) said at a press briefing in Quezon City.

Mayon, the country’s most active volcano, has been spewing ash, lava and pyroclastic material since Jan. 13.

Solidum advised residents and tourists to avoid the danger zone and airlines to avoid flying near the volcano summit.

The danger zone around the 2,462-meter volcano has been expanded to a radius of 8 km.

Ash that the volcano released around 12:45 p.m. fell on three villages in the town of Camalig.

The ash caused zero visibility to motorists and rescuers from the military and disaster responders, who were evacuating residents from the 8-km radius of the volcano. 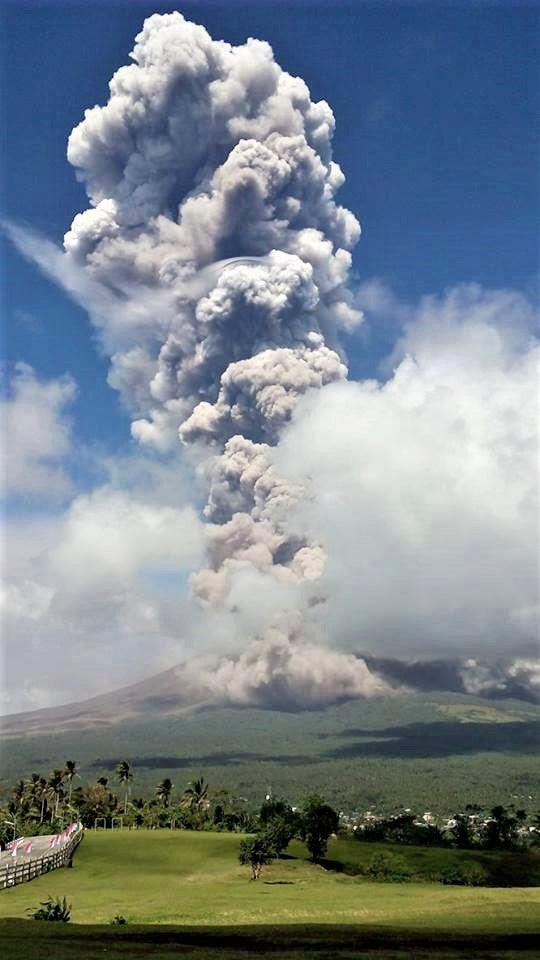 MAYON VOLCANO / JANUARY 22, 2018 Mt. Mayon spews column of ash into the sky about 10 kilometers in height around 12: 45 PM raising its alert level from 3 to 4 on Monday. The Ashfall will hit the towns of Guinobatan, Oas, Polangui, Libon and Ligao City. Photo by Michael Jaucian / Inquirer Southern Luzon

The wind also brought the ashfall to the province of Camarines Sur, causing Gov. Miguel Luis Villafuerte to suspend classes at all school levels in Rinconada district. Heavy ashfall was noted around 4 p.m.

Before the day turned dark, residents in Guinobatan and Camalig towns said they had heard rumblings and an explosion from the volcano.

Alanis characterized the event as a “vulcanian” eruption that brought ash cloud, lava and pyroclastic flow.

A vulcanian eruption results from the sudden release of large quantities of magmatic gas, ejecting materials high in the air to form the cauliflower clouds that were observed on Monday.

“What is dangerous here are the pyroclastic flows, which have a heat index of 1,000 degrees Celsius. They are also very fast [that] we can’t outrun these flows unlike the lava that is slow moving,” he said.

Solidum said Alert Level 4 was raised to forewarn residents of stronger eruptions so they could leave.

The groups of evacuees, who were permitted to come home to their villages outside the permanent danger zone (PDZ) in the cities of Legazpi and Ligao, were evacuated again.

The evacuees were allowed to go home after Phivolcs declared that those in danger from the volcano’s activities were only those living inside the PDZ.

As of 2 p.m., at least 38,196 people had been evacuated in the towns of Daraga, Camalig, Guinobatan, Malilipot and Santo Domingo, and the cities of Legazpi, Tabaco and Ligao.

Some 20 flights to and from Bicol were canceled on Monday. —WITH REPORTS FROM JAYMEE T. GAMIL AND JOVIC YEE IN MANILA