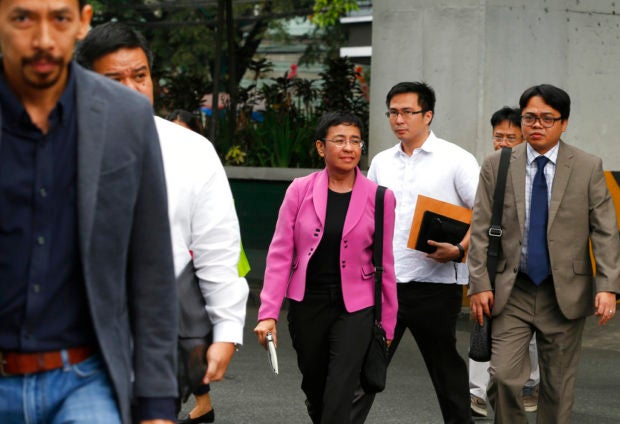 Maria Ressa, center, CEO of the online news agency Rappler, walks with her lawyers to the National Bureau of Investigation to shed light on the NBI’s summons on the cyber libel complaint filed against Rappler five years ago Monday, Jan. 22, 2018 in Manila, Philippines. Last week, the Philippine securities commission has revoked the registration of Rappler, known for its critical reporting on Philippine President Rodrigo Duterte, a move media watchdogs said is an act to muzzle the free press. (AP Photo/Bullit Marquez)

The National Bureau of Investigation has found “probable cause” to file a criminal complaint against news website Rappler for its report in 2012 that businessman Wilfredo Keng had lent a vehicle to then Chief Justice Renato Corona.

Manuel Eduarte, head of the NBI Cyber Crime Division (NBI-CCD), said the subpoena issued to Rappler’s founder Maria Ressa was not the start but the end of the investigation.

“We’re already wrapping up … We already found probable cause, that’s why we’re now getting their side,” Eduarte told the Inquirer on Monday.

Eduarte said the NBI had found libelous content in the Keng story.

Rappler reported that Corona had allegedly used Keng’s SUV in going in and out of the Supreme Court toward the end of his impeachment trial in the Senate.

Ressa and two others were summoned after the Securities and Exchange Commission (SEC) canceled Rappler’s registration for violating restrictions on foreign ownership of local media. Rappler is still operating pending an appeal.

The SEC said Rappler broke the law when it gave American investor Omidyar Network the means to exercise some control over the news site, or veto powers on company decisions. Rappler says that is “ludicrous.”

Interviewed by reporters at the NBI, Ressa reiterated that Rappler had nothing to hide and that the probe was proof of the government’s action to “harass and shut down Rappler.”

“This is part of the concerted effort that would impact on press freedom in the country, that would have impact on all of us,” Ressa said.

“We would continue to fight on any front that opens to face any charge that can be thrown against us,” she added.

President Duterte has repeatedly threatened to shut down Rappler for publishing what he claimed were false reports about him and his administration.

Presidential spokesperson Harry Roque said that although Mr. Duterte may not be happy with some journalists, he had done nothing to stop them.

“If the President wanted to curb press freedom, he could have done it, but he only speaks against the press,” Roque told a regular briefing.

“That’s all he can do and he has the right to be angry and curse the press,” he added.

Though Mr. Duterte has expressed bemusement at allegations he influenced the SEC, the complaint against Rappler was initiated by Solicitor General Jose Calida.

Eduarte said the NBI investigation of the online libel case was “50/50” complete.

“The content of Ressa’s counteraffidavit would determine whether or not the case would push through,” he said.

Ressa was given 10 days to submit her reply.

Eduarte said the online libel case and the probe of Rappler’s alleged violation of the antidummy law were two separate cases.

Unlike the online libel case, Eduarte said the probe of Rappler’s ownership had yet to begin.

He said one of the considerations was Rappler’s plan to question the ruling in the Court of Appeals. —REPORTS FROM AIE BALAGTAS SEE