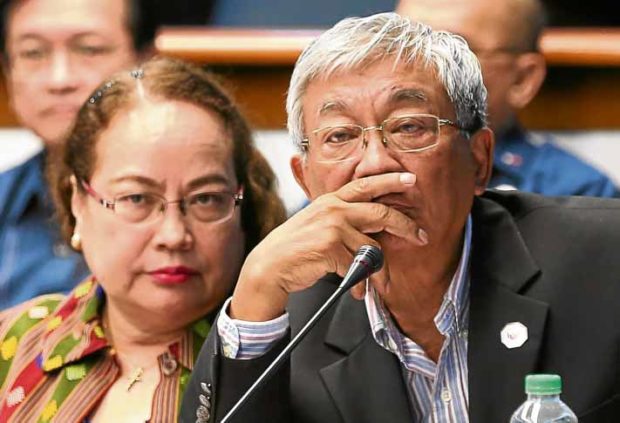 DENGVAXIA FIASCO Former Health Secretaries Paulyn Ubial and Enrique Ona testify during the hearing of the Senate blue ribbon and health committees,which are looking into the Dengvaxia controversy. —JOAN BONDOC

Former Health Secretary Enrique Ona said on Monday that he would not have allowed the implementation of the dengue immunization program on a massive scale if he were still with the Department of Health (DOH) in 2016.

Appearing at the continuation of the inquiry of the Senate blue ribbon and health committees into the Dengvaxia controversy, Ona pointed to a 2015 study questioning the safety of the dengue vaccine developed by French pharmaceutical giant Sanofi Pasteur.

The study involving the Dengvaxia clinical trials was published in the Sept. 24, 2015, issue of the New England Journal of Medicine.

Ona said the paper was accompanied with an editorial titled “A candidate dengue vaccine walks a tight rope.”

“And if the editorial was read by any expert in infectious disease or public health, would have made one wait for more follow-up studies to further evaluate the safety and efficacy sans cost. In short, value for money so essential to today’s environment,” Ona said, reading a commentary that he wrote in December last year.

He said the DOH leadership that took over in 2014 was “solely responsible for decisions that [have] resulted [in] what is becoming to be a major health nightmare in the country today.”

He was apparently referring to former Health Secretary Janette Garin, who succeeded him and who implemented a massive dengue immunization drive using Dengvaxia in 2016.

The DOH halted the P3.5-billion inoculation program last Dec. 1 after Sanofi Pasteur announced new analysis that showed Dengvaxia worsened symptoms in vaccinated people who had no previous exposure to the dengue virus.

More than 830,000 children had been given Dengvaxia before the DOH stopped the program.

Many have fallen ill and some have died, though their deaths have not been proven to be a direct result of vaccination with Dengvaxia.

Asked by Sen. Richard Gordon, chair of the Senate blue ribbon committee, if he would have recommended the dengue vaccine to the DOH, Ona replied: “It should have not been implemented the way it was done, meaning targeting almost a million children because the basis for the issues being raised were still a big question mark.”

Ona said a clinical trial was done by the DOH in 2011 on Dengvaxia but no conclusion could be derived from the study because it was still in its early phase.

He said that he was briefed by Sanofi Pasteur in 2011 on Dengvaxia and that the pharmaceutical company never claimed the vaccine was ready for use.

Ona also said he did not accompany then President Aquino to meet with Sanofi Pasteur officials at the Philippine Embassy in Beijing in November 2014 because he was already on leave at the time.

Before the hearing concluded, current Health Secretary Francisco Duque III, answering questions from Gordon, told the committees that he would have done due diligence and “would have been more prudent and more conservative, especially because you’re talking here of lives of people and, more importantly, lives of my children.”

Not in election year

Former Health Secretary Paulyn Ubial, who succeeded Garin, reiterated that the purchase of the dengue vaccine was done in haste and her stand was not to recommend vaccination during an election year.

“Even if the dengue vaccine was a very good vaccine, the manner and the timing of its introduction during an election year would have tainted the intentions of introducing it. There would be a lot of questions and doubts on its efficacy and safety at the very start of the introduction,” Ubial said.

But Garin stood her ground, denying that the acquisition of the dengue vaccine was done in haste.

“We [made] our decision based on the documents and data available at that time,” Garin said.

“We did it because dengue was a problem. Yes, it was not in the top 10 but it was an infectious disease with no cure, with increasing morbidity and mortality, and a solution has to be handed during that time,” Garin said.

But it was found during the hearing that health authorities had not yet completed clinical trials of the vaccine when the inoculation program started in March 2016.

Replying to Gordon’s query, Dr. Rosario Capeding, head of the Microbiology Department and Dengue Study Group of the Research Institute for Tropical Medicine, said the third phase of the trials, or the “long-term follow-up for safety,” was completed only last September.

Capeding said 31,144 children, 3,500 of them Filipinos, were enrolled for the third phase of the trials.

Gordon said completing clinical trials was part of the diligence that health authorities should have done.

Asked by Gordon whether there was danger because the trials had not been completed when the immunization drive was launched, Ona said that was what he meant when he said the “red flag” was “very clear.”

“What I mean is, you have to think decisively if you will implement [the dengue vaccination program]. If I were the [health] secretary, I would not implement it in that extent,” he said.