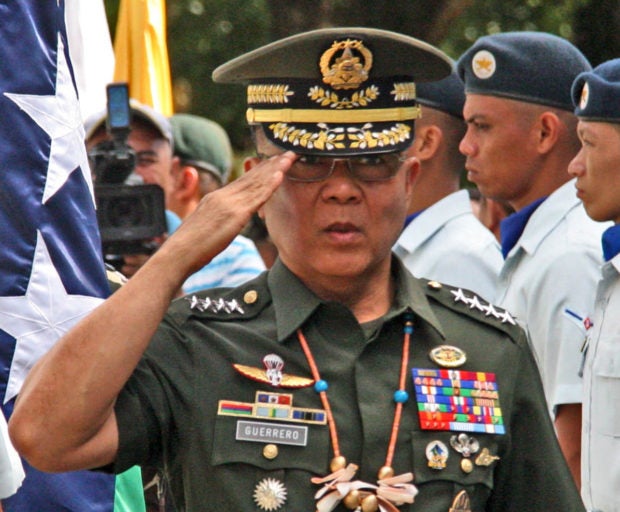 Armed Forces of the Philippines Chief of Staff Gen. Rey Leonardo Guerrero would be the next Administrator of the Maritime Industry Authority, according to President  Rodrigo Duterte. The President made the announcement before soldiers on January 22, 2018 at Compostela Valley. (CDN PHOTO/JUNJIE MENDOZA)

President Rodrigo Duterte announced on Monday that Armed Forces of the Philippines (AFP) Chief of Staff Gen. Rey Leonardo Guerrero would be the next Maritime Industry Authority (Marina) Administrator.

(After Guerrero is done, he will be in charge of Marina after I fired the one who was always travelling.)

Earlier, Duterte had extended the term of Guerrero until April 24, 2018. Guerrero was supposed to have retired from military service since he already reached the compulsory retirement age of 56 last December 17.

Guerrero, a graduate of the Philippine Military Academy “Maharlika” Class of 1984, will be among the growing list of retired military men serving in the government.

IN THE KNOW: Military men in Duterte Cabinet

In June 2017, the Inquirer listed 59 retired military generals, police directors, admirals and colonels who have been appointed to the Duterte Cabinet and other agencies. /kga, je