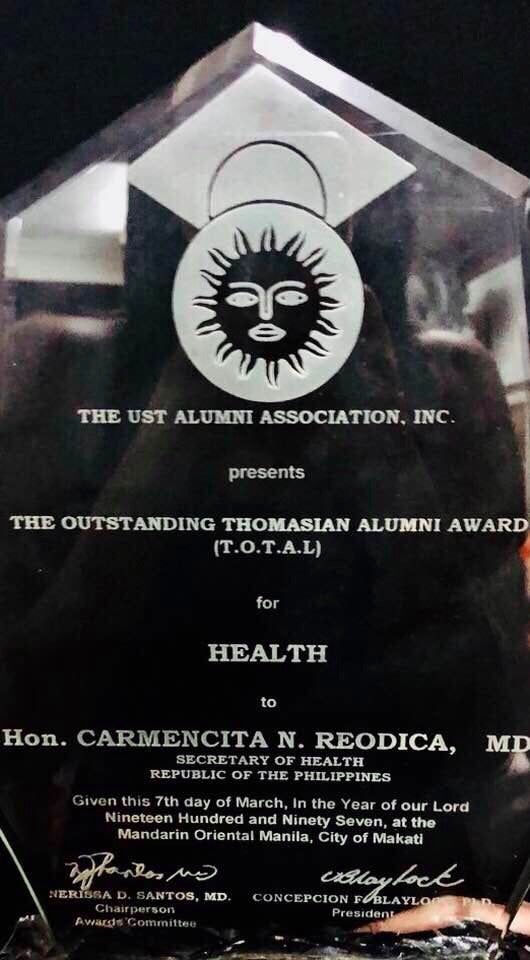 Former Health Secretary Dr. Carmencita Noriega-Reodica – feted as The Outstanding Thomasian Alumni (T.O.T.A.L) awardee in 1997 – would return the plaque given to her by the University of Santo Tomas Alumni Association Inc. (USTAAI) in the midst of demands for the organization to revoke the recognition it gave to Assistant Secretary Esther Margaux “Mocha” Uson.

For Reodica, the award was a “treasured and priceless part of my memorabilia” since she served at the Department of Health (DOH) for 33 years.

But now, Reodica believed that the award she received from the USTAAI has already “lost its meaning and significance.”

“Out of personal conviction and many others more deserving, I am returning this award for it has lost its meaning and significance,” Reodica said in a statement shared on Facebook by a member of her family, whose name was withheld upon their request for privacy reasons.

Although a friend has explained to her that the award she received was different from the award given to Uson, the former health chief said: “It’s not the Award, it’s the giver, The USTAA.”

In 1996, Reodica was appointed by former President Fidel V. Ramos as the first woman secretary of the health department, data from the DOH showed.

She was a graduate of UST College of Medicine Batch 1962.

On Sunday, the USTAAI bestowed Uson the Thomasian Alumni Award for Government Service during the UST Grand Alumni Homecoming. Uson is an official at the Presidential Communications Operations Office (PCOO) in charge of social media.

USTAAI president Henry Tenedero and vice president John Simon explained that the “sole criteria” for awardees is that he/she was a graduate of the university and serving the government.

READ: UST Alumni Association: Mocha Uson is an alumna, so she gets award

The UST AAI has been drawing flak from former and current students of the university, including the UST Faculty of Arts and Letters and Alliance of Concerned Thomasians Alumni Association (ACT-Now), which both have called on the USTAAI to withdraw Uson’s award.