Small belly should be a must for new cops – Lacson 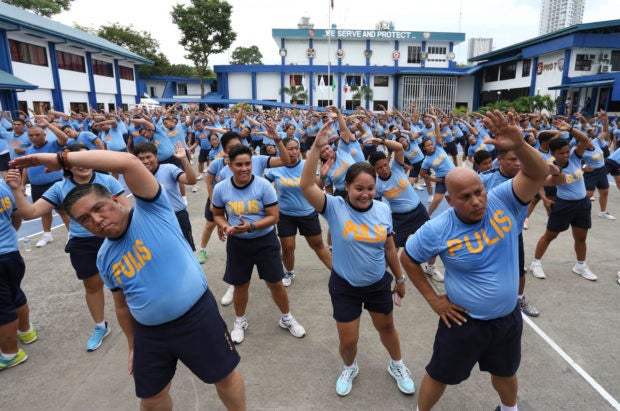 Sen. Panfilo “Ping” Lacson said on Sunday he supported the move to do away with the height requirement for aspiring police officers but he would push for them to limit their belly size.

The country’s top cop, Ronald dela Rosa, should lead by example, said the senator, who as Philippine National Police chief during the Estrada administration implemented a strict belly requirement for policemen.

Lacson was reacting to the decision of the National Police Commission (Napolcom) to remove the height requirement for those taking the PNP entrance exams on April 22.

The Napolcom now requires examinees to be degree holders and not more than 30 years old.

Upon passing the entrance exams, male applicants should meet the height requirement of 1.62 meters. It’s 1.53 m for female applicants.

The height requirement stays as this is set by Republic Act No. 6975, the law that established the PNP.

“Why would you deny men or women aspiring to be police officer when they are intelligent and have integrity?” Lacson said.

“A person’s abilities or talent does not stem from his height,” he said. “It’s in his character. The most important requirement is character.”

He said a big belly projected a lack of discipline and would make a policeman unable to catch pickpockets or criminals on the run.

During his time as PNP chief, Lacson said he required policemen under his command to have 86.4-centimeter waistlines, but “the real purpose was for them to be physically fit and trim.”

Told that Dela Rosa did not have an 86.4-cm waistline, Lacson said the PNP leadership should lead the way.

“It can’t be you’re exempted from physical fitness. You have a [101.6 cm] waistline and you’re telling your men that they should have [86.4-cm] waistlines. That cannot be. You won’t be respected and followed,” he said.

He recalled that during his stint as PNP chief, there were police officers who were able to trim their waistlines from
112 cm to 86 cm in two months.

Lacson said he bought them pants for free. “And their wives were very happy. Their husbands were no longer going to beer gardens because they wanted to trim their waistlines.”