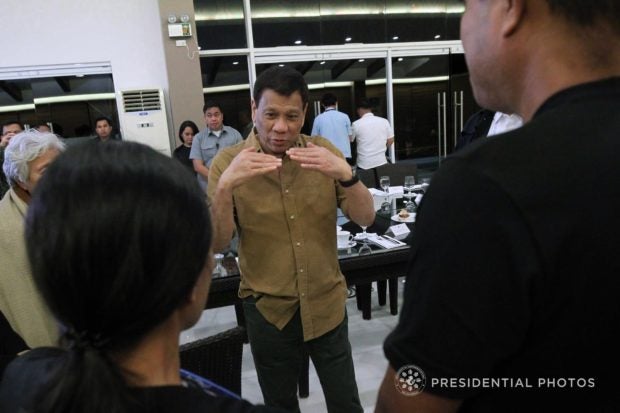 President Duterte engages in a discussion with the two rebel returnees from the New People’s Army who were presented to the President at Matina Enclaves in Davao City on Jan. 20. —MALACAÑANG PHOTO

LUCENA CITY — Communist Party of the Philippines (CPP) founder Jose Maria “Joma” Sison on Sunday urged the youth to emulate the protests of the “First Quarter Storm” (FQS) of 1970 against the Duterte administration.

But President Rodrigo Duterte reiterated in Davao City that the communist movement in the country had become irrelevant after meeting on Saturday with communist leaders who had recently surrendered.

“The student youth of today can and should launch huge mass marches and rallies in the National Capital Region and in the provinces, like during the First Quarter Storm (FQS) of 1970,” Sison said in an online interview from his base in Utrecht, The Netherlands.

Sison was referring to the social turmoil in 1970 caused by riots and demonstrations from late January to March of that year that then President Ferdinand Marcos used as a pretext to declare martial law.

Sison cited recent controversial events, like the Tax Reform for Acceleration and Inclusion (TRAIN) law, moves to amend the Constitution and moves against press freedom, to incite the public against the government.

“With the signal act of the student youth, the rest of the people — workers, the peasants, women, youth of other sectors, cultural workers, professionals and religious — will participate in the mass-protest movement,” Sison said.

Sison disputed the recent results of surveys conducted by Social Weather Stations and Pulse Asia, whose questions and sampling methods he criticized as “not correct.”

“It is not true that Duterte enjoys high trust rating and popularity,” Sison said.

“We should not forget that Duterte was elected by a minority of the total electorate in 2016, only 39 percent, 25 [percent] of that in Mindanao and Cebuano part of Visayas and 14 [percent] from the bailiwicks of Marcos, Danding Cojuangco, Arroyo, Estrada and Remulla in Luzon,” he said.

But Mr. Duterte reiterated that the communist movement had lost relevance because people are already questioning the sincerity of their cause.

Mr. Duterte made the comment when he met with National Democratic Front-Far South Mindanao Region (NDF-FSMR) spokesperson Noel Legazpi and his wife, Wendy Bendalian, who both surrendered.

Legazpi, also known as Ka Efren Aksasato, and his wife voluntarily surrendered to the military in Koronadal City on Jan. 15 through the help of South Cotabato local officials.

“Governor Fuentes helped a lot in convincing Ka Efren to come down,” Leander said, adding that Legazpi, 58, had been NDF-FSMR spokesperson for 20 years, while Bendalian was the chief medic of the New People’s Army’s medical team.

One of the sources present at the President’s meeting with the surrendered rebels said Mr. Duterte praised the couple for doing the right thing and called on others to follow suit.

Aside from meeting Legazpi, Mr. Duterte also attended the reunion of the Ateneo de Davao University High School Batch 1961, whose members — including Finance Secretary Carlos Dominguez — were his classmates.