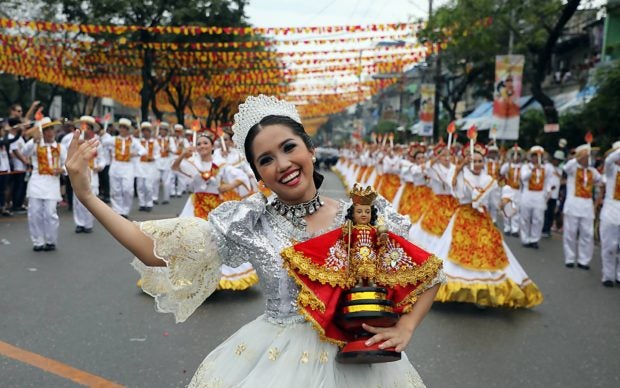 He also commended Sinulog volunteers, judges and even their special guests – Secretaries Wanda Teo of Tourism and Secretary Delfin Lorenzana of National Defense for making this year’s celebration a success.

“I have a confession (to make). Wala koy gi himo. Daghan ang volunteers. Usa ra ang akong trabaho dinhi – turista. Tan aw lang ko (I didn’t do anything. There are a lot of volunteers. I only have on job, being a tourist),” said the mayor who was smiling as he delivered the short message during the grand parade’s formal opening ceremonies inside the Cebu City Sports Center (CCSC) shortly after 11 a.m. on Sunday.

The celebration started with an 8 a.m. Mass officiated by Msgr. Roberto Alesna, parish priest of the Archdiocesan Shrine of St. Therese of the Child Jesus in Barangay Lahug, Cebu City.

Contingents, who gathered along the New Imus Road, started to perform along the 5.3-kilometer route to the CCSC while the Mass was ongoing.

Dancers from the Cebu Provincial government then performed on the grandstand stage inside the CCSC followed by puppet entries in the 2018 Sinulog.

In his homily, Alesna commended Osmeña for implementing the liquor ban during the grand parade.

“This is one way of concretizing our devotion to the Sto. Niño because faith without action is empty,” he said.

Alesna also asked Cebuanos to “show our love for the little ones.”

He said that devotion should not only end with the display of Sto. Niño images in homes, offices and chapels but should be manifested by helping the humble, poor, defenseless, powerless, helpless and those who rely on God for support.

Other than securing spectators during the Sinulog Grand Parade, the Police Regional Office in Central Visayas (PRO-7) vowed to strictly implement the liquor and party ban within the five-km radius of the parade route.

Chief Supt. Robert Quenery, PRO-7 director, personally give instructions to personnel deployed at the parade route to ensure the ban would be strictly enforced, especially along General Maxilom Avenue, which had been a hot spot of rowdy parties during the past Sinulog festivities.

“Tinututukan natin yan (We will pay close attention to that place). We really have to enforce the executive order of the city mayor,” Quenery said. Quenery said that even after the parade, police personnel would be on stand-by and watch out for revelers who might become drunk and turn rowdy. /cbb