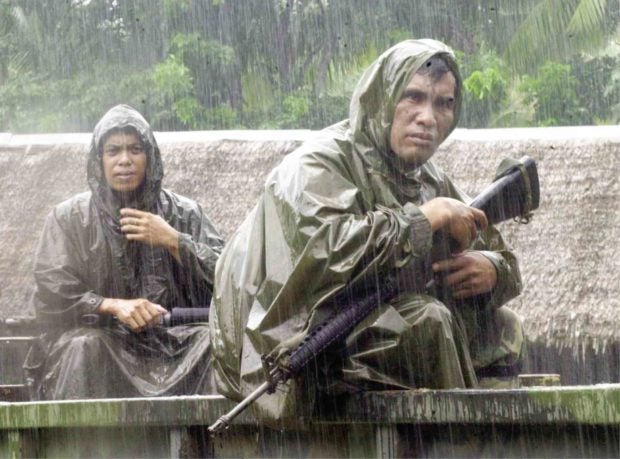 Army soldiers on their way to the coconut and rubber plantation of Golden Harvest on June 11, 2001, following the kidnapping of workers by Abu Sayyaf. —DENNIS SABANGAN

ZAMBOANGA CITY — The Abu Sayyaf member tagged as the one who beheaded two Filipino workers in 2001 in a bloody gesture of mocking the then Arroyo administration has been arrested, the military said.

Abu Sayyaf had described the beheadings as an “Independence Day gift” to then President Gloria Macapagal-Arroyo in retaliation for her refusal to call off military offensives against the terror group.

Faizal Attong Sariul, alias Ziad, was tagged by witnesses as the one who beheaded two of the 17 workers of Golden Harvest, a company that runs a coconut and rubber plantation in Lantawan, Basilan, who were kidnapped by the terror group on June 11, 2001. Sariul was just 17 years old then.

Senior Supt. Fergen Torred, head of the Western Mindanao police’s intelligence division, said Sariul, who is now 38 years old and had been in hiding for 17 years, was arrested in the village of Mercedes in this city by police serving a warrant.

Torred said witnesses pointed to Sariul as the Abu Sayyaf member who beheaded Golden Harvest workers Primitivo Falcasantos and Crisanto Suela on June 12, 2001, a day after they were kidnapped and just as the country celebrated Independence Day.

Heads in a box

The terrorists, in a gesture of mocking Arroyo, placed the workers’ severed heads in a carton box and left it on a roadside in Lantawan town, Basilan for all to see. When news of the gory display spread, Abu Sayyaf issued a statement declaring the heads to be their Independence Day gift to Arroyo.

Several weeks after the two workers were beheaded, Abu Sayyaf also beheaded one of its foreign hostages, American national Guillermo Sobero, to taunt Arroyo and scoff at military operations that had failed to pin the terrorists down. —JULIE ALIPALA