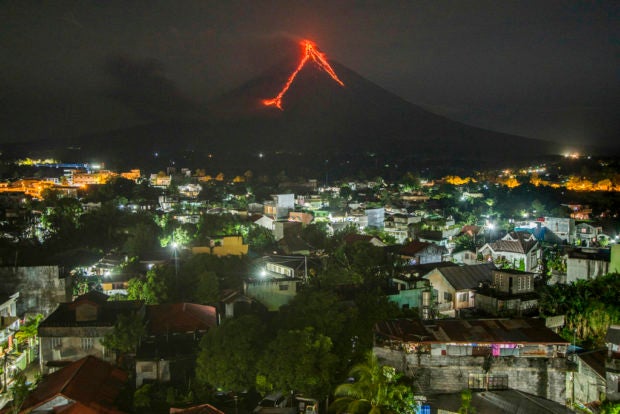 Lava cascades down the slopes of the Mayon volcano seen from Legazpi city, Albay province, 340 kilometers (210 miles) southeast of Manila, Philippines, Tuesday, Jan. 16, 2018. Over 9,000 people have evacuated the area around the Philippines’ most active volcano as lava flowed down its crater Monday in a gentle eruption that scientists warned could turn explosive. (AP Photo/Dan Amaranto)

LEGAZPI CITY—At least 2,610 families or 11,522 persons from the 8 to 8.5 kilometer radius of Mount Mayon were decamped in Legazpi City on Thursday night.

Evacuees were from the barangays (villages) of Padang, Buyuan, Mabinit, Matanag and Bonga.

Miladee Azur, head of City Disaster Risk Reduction and Management Council said the decision was made after Philippine Institute of Volcanology and Seismology (Phivolcs) Director Renato Solidum reiterated that the most threatened in the recent activities of Mayon Volcano are residents inside the 6 to 7 kilometer radius.

“As per advisory by [Phivolcs] Director Solidum in a bulletin, with alert level 3, the areas within the Southeastern part inside the 7 kilometer radius are affected. It means, there’s actually no reason for them to evacuate but they were fearful when they saw (the activities of) Mayon Volcano,” she said.

Azur said though the evacuation on Monday was voluntary, most of the evacuees wanted to go back to their houses when they knew that the most affected are within the 7-kilometer radius.

“That was voluntary evacuation. It was not a mandatory evacuation. We just accommodated their willingness to evacuate because they couldn’t sleep at night,” she added.