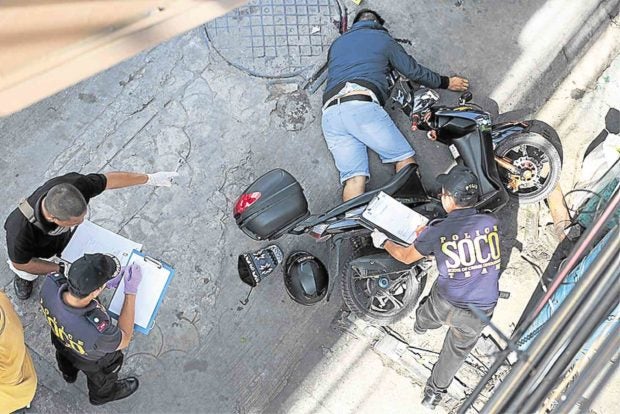 The two motorcycle-riding gunmen who killed two jail officers in Muntinlupa City on Thursday turned out to be policemen.

PO3 Arnel Rubio and PO1 Jover John Lardizabal were also killed after being pursued by the coworkers of their victims, JO1 Felino Salazar and JO2 Elmer Malibdao, from the Bureau of Jail Management and Penology (BJMP).

Salazar and Malibdao had just left Muntinlupa City Jail on a motorbike when they were followed by the two assailants, who fired upon them as they reached Manila South Road, Barangay Tunasan, around 8:30 a.m.

The gunshots were heard by other jail personnel, who saw and fired on Rubio and Lardizabal. Rubio was killed on the spot while Lardizabal was brought to Ospital ng Muntinlupa where he was declared dead on arrival.

Salazar and Malibdao were pronounced dead at Medical Center Muntinlupa.

Policemen who later arrived at the crime scene were surprised when they recognized Rubio.

Senior Supt. Dante Novicio, Muntinlupa City police chief, said that Rubio used to report to the intelligence section and was dismissed in September 2016 due to grave misconduct.

Supt. Marites Salvadora, assistant city police chief, said Rubio was sued by a Bureau of Corrections (BuCor) personnel whom he had arrested for illegal gambling in 2015. According to the arrested BuCor officer, Rubio pocketed the money that was seized from him during the operation.

Lardizabal, whose body was also positively identified by his live-in partner, turned out to be a policeman currently assigned at the National Capital Region Police Office (NCRPO) in Camp Bagong Diwa, Taguig City.

Chief Supt. Tomas Apolinario, Southern Police District director, said investigators were looking at the possibility that the killing of the BJMP jail guards was “drug-related.” 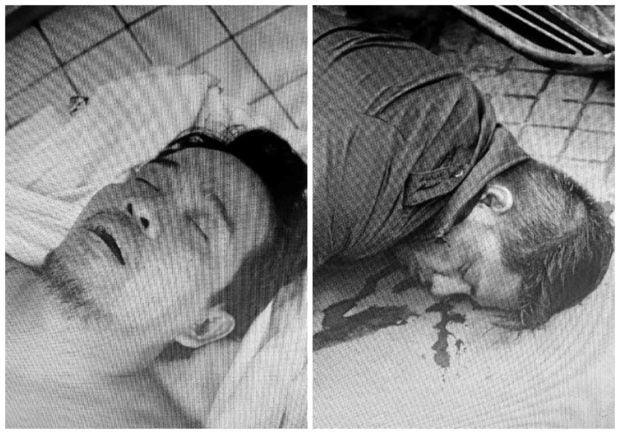 Salazar was also on the NCRPO’s drugs watch list and facing an administrative case for grave misconduct.

“He was a problematic jail guard [so] he was reassigned from one BJMP unit to another. He was just deployed to Muntinlupa jail for three months,” Novicio said.

As for Malibdao, Novicio said he had no record of involvement in illegal activities. “It’s just unfortunate that he was there hitching a ride on Salazar’s motorcycle when the gunmen attacked,” he added.

Another prison guard who happened to be at the crime scene and also on a motorcycle was arrested by the Muntinlupa police as a person of interest.

But Novicio said Prison Guard 1 Dee Jay Tanael, who is currently assigned at Bilibid, just happened to be passing by the area.

A security camera footage showed that Rubio tried to steal Tanael’s motorcycle in an attempt to escape after the shooting.