A tale of 2 kingdoms: Cambodian maid abused in Saudi for 13 years | Inquirer News

A tale of 2 kingdoms: Cambodian maid abused in Saudi for 13 years 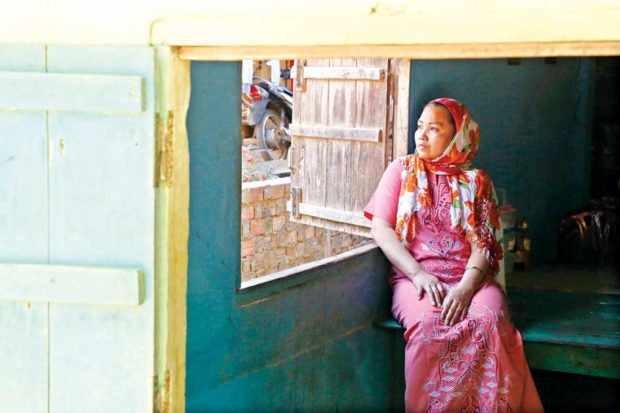 Thirteen years ago, two men came to Eng Pov’s village in Tbong Khmum province and knocked on her door. Pov, then either 20 or 21, doesn’t remember their names. All she remembers is their offer: to work as a maid in Saudi Arabia for $180 a month, with kind employers, food to eat, clothes to wear and the freedom to call home whenever she wanted.

Thirteen years later, she now realises she was signing up to be a slave.

“I almost gave up on life,” Pov said of her life in Saudi Arabia, wiping away tears with her headscarf as she described more than a decade of abuse and the dramatic escape that led to her being repatriated with the help of the Ministry of Labour last week.

Pov is now the second woman to be rescued out of roughly 100 maids recruited by an agency owned by Cham Muslim community leader Ahmad Yahya in 2005 to go to the Gulf state under a program that the Ministry of Labour now says was illegal.

But Bun Chhin, contacted earlier this week, said he meant to give Yahya permission only to “explore the market” and report back to the ministry.

“I said, ‘This is the right time, because the market has been open for a while and it was the strategy of the government to explore and send migrant workers to other countries’,” Bun Chhin said. “I’m sure I did not authorise any technical agreement to send maids to Saudi Arabia.”

A letter, addressed to the Chairman of Accept Group Co., Ltd and signed on 27th of September 2005 by then-Minister of Labour Nheb Bun Chhin, part of which reads: “I would like to inform the Chairman that the Royal Governments of both countries have not yet set the policy and working conditions on exchanging and using the labour force together. The Ministry of Labour and Vocational Training asks you to pause the process of the recruitment and sending of Cambodian workers to Saudi Arabia.”

It is unknown how many women from Pov’s group made it safely back to Cambodia.

Yahya, a prominent member of the Cham Muslim community, said he lost track of them after the ministry revoked his licence just three months after receiving the permission letter.

“It was not my responsibility anymore,” Yahya said. “Yes, I worry, but what could I do? What was I supposed to do? Nobody contacted me, so how can I know the situation there?”

At the time that Yahya’s recruiters came to Svay Khlaing commune in Kroch Chhmar district, Pov was looking to change her life.

She had run away from an abusive stepfather at the age of 16. She was illiterate, living with her 54-year-old adoptive mother, Sles Mahyan, eventually marrying Mahyan’s nephew and giving birth to a boy.

Upon arriving at the maid agency in Jeddah, Pov and the other maids had their passports confiscated and they were quickly separated. After a few months of working with her assigned family, she was told to pack.

“They started to beat me, slap me on the face, and kick my body . . . Then they pulled me into a basement and the wife came in and started to beat me too.”Suddenly, she was on her way to another home nearly 1,600 kilometres away, in Riyadh.

There, Pov said, a husband and wife in their 50s forced he to work 20 hours a day, only offering leftovers, locking her in the house when they left and cutting off access to the landline phone. Requests for her salary were met with verbal abuse, she said. When Ramadan came, she was given so much work that she did not sleep for weeks.

After five years of slave-like conditions, Pov said she tried to escape – but was caught.

“They started to beat me, slap me on the face, and kick my body,” she said. “Those two men, the father and son, beat me so severely . . . Then they pulled me into a basement and the wife came in and started to beat me too.”

Pov, sitting in her family’s tiny restaurant that doubles as a dentist’s office, broke down as she described being locked in the basement for days being beaten at random. “I could not contact anybody,” she said. “I had no friends or anybody to help me.”

Eng Pov, 35, and her godmother Sles Mahyan, 54, wipe away tears as Pov describes how she was abused by her employers for more than a decade in Saudi Arabia when she worked as a maid. Pha Lina

Back in Tbong Khmum, Pov’s adoptive mother and aunt say that they reached out to Yahya twice, once about two years after Pov disappeared and again three years later – a claim Yahya denies.

Eventually, “I assumed she was dead,” said Pov’s godmother Mahyan, her eyes wet with tears. Pov’s husband, who had gone to work as a fisherman in Thailand, had been killed in a robbery after Pov left. Her son, a chubby boy, grew into a skinny teenager. “I almost forgot about her,” Mahyan said.

In Riyadh, Pov decided to try to escape one more time, this time during a large Ramadan party in the family’s garden. With nothing more than the burqa she was wearing, she ran to a local police station, where police there refused to help her. Then, she said, she walked aimlessly for hours until she collapsed in front of a stranger’s house and begged on her knees for help.

A woman took pity on her, eventually taking Pov in as a maid and giving her a phone to contact her family.

It took another year for Pov and her family to find another Cambodian citizen in Saudi Arabia – a man who Pov eventually married – and a government official to assist in repatriating her.

By the time Pov landed at Phnom Penh airport last week with Labour Ministry official Othsman Hassan, it felt like she was coming home to a foreign country.

Labour advocates say Pov’s story exemplifies the risk that migrant workers face by travelling to countries where stories of human rights abuses abound, such as Saudi Arabia, in search of a better life.

Mouen Tola, of rights group Central, said Pov’s case was “really shocking, in particular because the woman was disconnected from her family for more than 10 years”.

According to Tola, the permission letter signed by Bun Chhin appears to break the law by authorising Yahya’s company to send maids to Saudi Arabia despite the fact that the government had not signed an agreement with the Gulf state.

Cham Muslim researcher So Farina said the government should review its existing deal with Saudi Arabia in light of Pov’s abuse case and several others that have emerged in recent years.

Cambodia and Saudi Arabia signed an MoU to begin final discussions on sending maids two years ago, but the deal was never finalised.

Despite this, 18 recruiting firms have agreements to send maids to the Gulf state, although they cannot yet legally send maids. Most of the maids who have returned said they went to Saudi Arabia through traffickers.

“This woman was sent in the past, but it gives us a signal that we should be more careful,” said Farina. “Now, we know the problem. We don’t want to repeat it.”

Ministry of Labour spokesman Heng Sour did not answer questions about the status of the MoU or whether the ministry had investigated maid abuse cases in Saudi Arabia in the past.

“As long as we receive a complaint and information, we will intervene,” Sour said in a message yesterday.

But Chou Bun Eang, anti-human trafficking director at the Ministry of Interior, said it would not be easy for Pov to seek justice from her abusers.

“She can file the complaint, but the decision is up to the court over there [in Saudi Arabia],” she said. “It’s not from our side.”

For Pov, the thought of justice seems far away. She still finds herself speaking in Arabic instead of Khmer, and spending long stretches of time reliving memories of her abuse.

She will need to work again, when she is ready.

More than anything, however, Pov is trying to reconnect with her family after existing only as a fading memory for the last 13 years.

Those years were hard for her son, Mahyan said. She recalled the boy, then 6 or 7 years old, running home crying because other children had made fun of his parents for abandoning him. To this day, 18-year-old Sman Sokrey still does not speak to his mother, even though he insists he is happy she is home. “I’m just shy,” he said. “I never realised I still had a mum.”

But when Pov puts a tentative hand on his shoulder for a photo, he leans away from her embrace.

“He is angry at me,” Pov said, the tears flowing again.