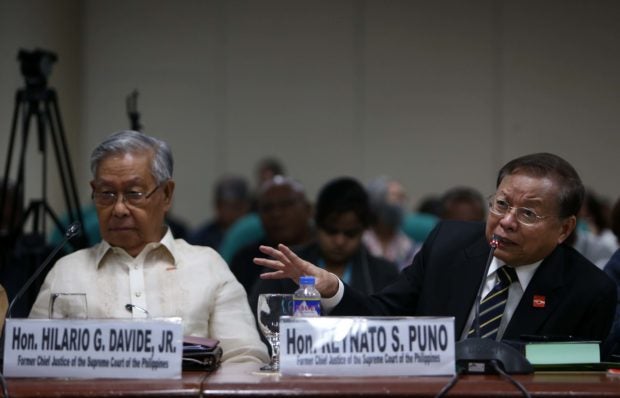 Former Chief Justice Hilario Davide Jr. warned the Senate on Wednesday that shifting to federalism, as proposed by the Duterte administration and its allies, was a “lethal experiment” as it did not suit the Philippines and the “people of our generation and even those of the succeeding generations.”

But another former Chief Justice, Reynato Puno, told the senators that the Philippines was a failing democracy under the unitary form of government, where some powers were merely decentralized to local governments.

Davide, the 20th Chief Justice of the Philippines, and Puno, the 22nd, spoke at the opening of the Senate’s hearing on proposals to amend the 1987 Constitution for a shift to the federal form of government.

Davide, one of the framers of the 1987 Constitution, insisted that the present unitary system best fit the country’s history, culture, character, and traditions, among other things, as it had “proven itself to be so.”

“My position is: A shift to federalism is a lethal experiment, a fatal leap, a plunge to death, a leap to hell,” he told senators on the committee on constitutional amendments and revision of codes headed by Sen. Francis Pangilinan.

Davide said that if the shift to federalism were to deal with the imbalance created by an “Imperial Manila,” then this could be done by “effectively and efficiently implementing the relevant provisions” of the present Constitution “for strong local autonomy and decentralization.”

He said Congress could also amend the 1991 Local Government Code.

In his comments, Puno joked that he had no intelligent answer to Davide’s statement that going federal was a leap to hell because he had never been to hell.

Puno said shifting to federalism would require the “overhauling” of the Constitution or a revision and “not a surgical amendment” because, among other things, there was a need to define the philosophy of the federal government to be adopted.

Former Sen. Aquilino Pimentel Jr., who authored the Local Government Code, disagreed with Davide that going federal was a lethal experiment, saying that on the contrary, it was a “vital” one as this was in the interest of good government and in providing a good life for the Filipinos.

Pimentel said that if the Philippines would go federal, the Constitution should be revised.

“If we have to revise the Constitution to give meaning to the devolution intended by the Local Government Code, we might as well move forward to the scope and power by adopting the federal system,” he said.

Answering Sen. Loren Legarda’s question whether the 1987 Constitution had served the needs of Filipinos, Puno described the Philippines as a failing democracy under a unitary form of goverment.

“Why are we classified year in and year out as a failing democracy? One of the principal reasons for that is our unitary form of government,” Puno said.

He said the decentralization of some of the powers of the national government to local governments to deal with the needs of the people had not worked and this was the reason Pimentel was batting for federalism.

Davide, Puno and Pimentel were in agreement that the best mode to amend or revise the Constitution was through a constitutional convention (Con-con), the delegates to which would be elected by the people.

Davide made it clear that there was “absolutely no need to amend or revise” the Constitution, as there was “nothing [there that needed] amendment or revision at this time.”

Puno also made it clear that Congress should not be given the task to rewrite the Constitution as its “primary business” was to make laws.

But he agreed that there was a need to amend the Constitution, as times had changed since it was adopted 31 years ago.

Puno also called “cheap” the argument that a constituent assembly (Con-ass) should be the mode since it was cheaper than a Con-con.

“You should not count the cost when writing a Constitution. A good Constitution is the best investment a people can make,” he said.

Puno said he preferred a “hybrid” constitutional convention, as it would be composed of elected and appointed delegates and would be nonpartisan.

He agreed with Davide that if Congress eventually decided on a Con-ass, the Senate and the House should vote separately on proposed amendments to the Constitution.

Article 17 provides that “any amendment to, or revision of, this Constitution may be proposed by the Congress, upon a vote of three-fourths of all its members; or a constitutional convention.”

Puno cited several provisions in the Constitution showing the Senate voting separately as an institution like in declaring a state of war.

Davide said he agreed with the opinion of constitutionalist Joaquin Bernas that “what is essential is that both houses vote separately” as “the power to propose amendments is given not to a unicameral body but to a bicameral body.”