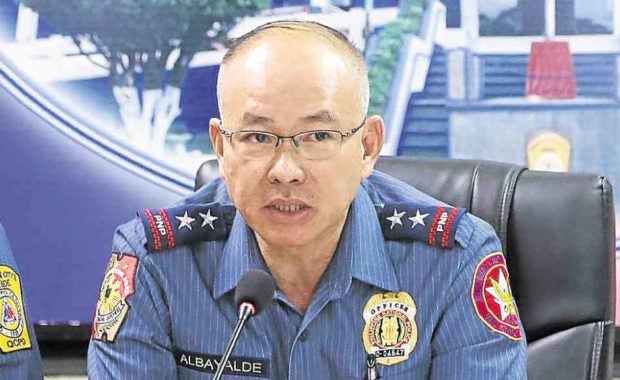 Saying the war on drugs made 2017 a “truly remarkable year” for law enforcement, the chief of the Metro Manila police noted a 17.96-percent drop in crime volume in the capital involving “focused crimes” like murder, homicide and physical injuries, and a 13.87-percent decrease in overall crimes against persons.

“This is the effect of the war on drugs,” Albayalde said, attributing the falling numbers to the Duterte administration’s “Oplan Tokhang” and “Oplan Double Barrel Reloaded” campaigns which, according to the Philippine National Police, have killed about 4,000 suspected drug offenders nationwide.

The controversial campaigns have long been denounced by the church, political opposition, and human rights watchdogs in the country and the international community for their alleged disregard for due process and instigation of extrajudicial killings (EJKs) targeting mostly the poor.

Albayalde also noted the arrest of 17,487 drug offenders in 2017, as well as total drug seizures worth P3.77 billion last year. An additional 29,087 people had surrendered voluntarily, he added.

Lawmakers who have long questioned Tokhang and Double Barrel, however, sneered at Albayalde’s accomplishment report.

“NCRPO is in the business now of peddling fake news,” Anakpawis Rep. Ariel Casilao told the Inquirer. “What is worse (about the crimes today is) that more cops are involved.”

Alliance of Concerned Teachers Rep. Antonio Tinio said declining crime rates cited by the NCRPO had actually been a “long-term trend” for more than a decade and “had nothing to do with Tokhang.”

“It’s utterly simplistic and absurd to link all or most crimes to drug use,” Tinio said. “Attributing lower crime rates to Tokhang and Double Barrel is merely a self-serving PR spin intended to justify the Duterte administration’s bloody war on drugs.”

“What’s for sure is that Tokhang and Double Barrel have contributed significantly to the increase in unsolved murders,” Tinio said.

The two party list representatives also pointed out the absence of any NCRPO data on EJKs.

Kabataan Rep. Sarah Elago called the figures “misleading, ironic and an insult to the families of Oplan Tokhang victims.”

But Albayalde stuck to his data and his explanation for the decline, saying it was clear that the suspects arrested in drug operations were the same perpetrators of other crimes.

“There’s a connection between drug peddling and robbery-holdups; drug users look for money to fund their addiction,” the official stressed.