‘Tax revolt’ vs Train kicks off 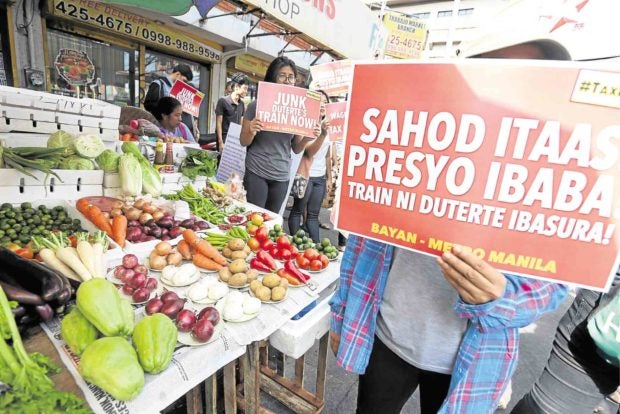 Bayan members gather at Trabajo Market in Sampaloc, Manila, not to buy food but to protest the government’s tax reform law. —MARIANNE BERMUDEZ

To kick off the mass actions, members of Bayan, Gabriela and Kilusang Mayo Uno compared the prices of basic goods before and after the implementation of the Train Act at Trabajo Market in Sampaloc, Manila.

They explained how the new law would force minimum wage earners, or those earning P512 a day, to further scrimp to cope with the rising prices of basic commodities.

Based on the figures shown by demonstrators, minimum wage earners can allot only P70 for food daily. The rest of their pay goes to the house rent, transportation, schooling, electricity, water and cooking gas, among other expenses.

“Worse, rental fees, water and electricity bills are expected to go up this year (because of Train),” said Cora Agovida, spokesperson of Gabriela Metro Manila.

According to her, the tax reform law is antipoor, saying that “even if the salary of minimum wage earners go up, they will still be left with nothing because of higher prices of goods.”

Nora Calubaquib, chair of the women’s group, said the solution was not tax reform but a wage hike.

Calubaquib said that to improve the economy, the government must improve the people’s lives by boosting their purchasing power.

At Dagohoy Public Market in Manila, 29-year-old Andrew Andaya, a juice and quail eggs vendor, complained that higher prices had reduced his earnings.

Before the tax reform law, Andaya said he took home at least P125 every day. Now, he’s lucky to earn around P100 due to the higher cost of sugar he uses for his juices.

But the father of four kids said he could not raise his prices because “no one would buy from me.”

The price of white sugar has increased by almost P100 per sack, according to another
vendor, Jessica Manalo.

To cope with the higher prices and keep her store afloat, Manalo has no choice but to pass on the additional costs to her costumers.

Like Andaya, Manalo’s income has gone down as she has to shell out more money for capital.

For rice retailer Myrna Chiu, the poor will bear the brunt of the tax reform program.

According to her, people who used to buy quality rice like “sinandomeng” now settle for “broken rice,” the cheapest kind, which costs P38 a kilo.

Broken rice used to be P36 a kilo before the government enforced the Train law. Sinandomeng, meanwhile, now costs P44 per kilo, up from P38 last year.

“Those who are really poor are even poorer now. They cannot do anything except tighten their belts. I pity them because they are the most affected,” Chiu said.

The other vendors interviewed by the Inquirer said the price increases were initially felt in December and further worsened in the first week of January.

“Business has gone down,” said grocer Shirley Guevarra, 46, who added that even the number of her customers had decreased.

But consumers have yet to see the worst, she predicted, adding that by next month, more businessmen will raise their prices when they run out of old stocks.

“Come February, once new supplies have been delivered, I think we will see [Train’s] full effect,” Guevarra said.

Other protests were expected to be held in the afternoon at Edsa-Muñoz Market in Quezon City, Alabang Public Market in Muntinlupa City, Pasig Palengke, Marikina Public Market, Plaza Salamanca in Kalaw, Manila, and Tala and Pajo Markets in Caloocan City.

“Simultaneous ‘palengke’ protests will be held in different public markets all over Metro Manila to register [our] rage against tax hikes which are already burdening the shoulders of poor Filipinos. The protests [today] will mark the start of the series of protest actions against Train,” Bayan said in a statement.