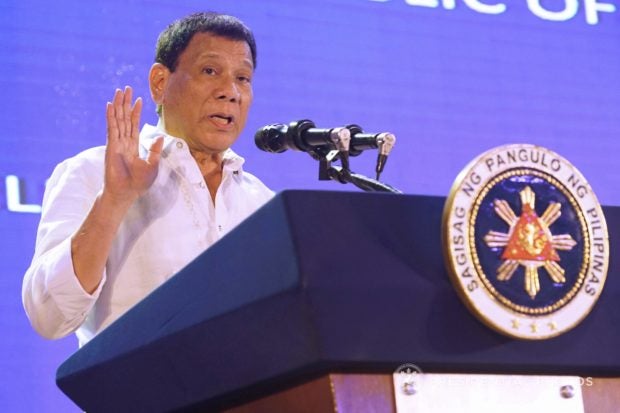 DAVAO CITY – President Duterte, who had been firing left and right “corrupt officials,” has warned abusive policemen and those who were considered scalawags that their days are numbered.

The President made the warning on Monday as Philippine National Police Dir. Gen. Ronald dela Rosa said the police were “stepping up operation against crime, the communist insurgency and illegal drugs.”

Duterte said he can understand if a policeman faces a case because he was doing his job but he could never understand the corrupt ones.

He said he would defend those who were performing their jobs but will not think twice about firing the corrupt ones.

“Your two pockets are full already, especially the generals,” he said as he spoke about the salary increase the police force had received.

“I’m so very much enamored with police work,” he said but added that he hates those who frequent bars.

“I don’t want to see police cars in entertainment houses,” he added.

In reminding policemen of how serious he was against corruption and abuse, Duterte vowed to fire over 50 scalawags, including up to three generals.

“Those involved in abuses, murder-for-hire, those ‘ninja jobs,’ you do not only lose funds, you lose your life,” Duterte added.
He said he had been supportive of the police and even made as campaign promise the doubling of their salaries, which would finally become effective starting this month.
“If you have problems during your duty, I will help you,” the president said. “That graft and corruption will remain –  not during my watch. Magkahiyaan tayo.”

The President also mentioned that he had terminated Patricia Licuanan as Commission on Higher Education head on Monday even as he warned government officials not to be corrupt “under my watch.”