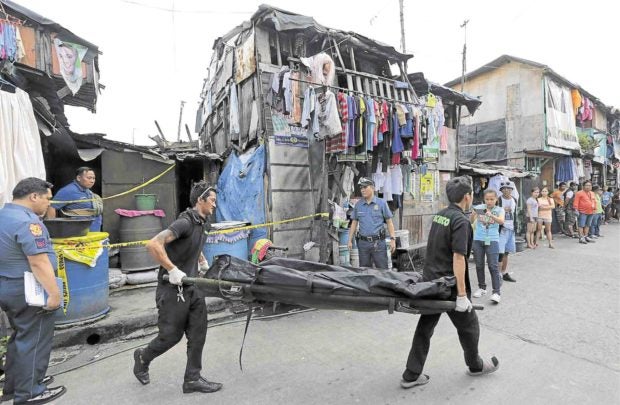 ‘SHOOTOUT’ AFTERMATH Funeral home workers carry the body of one of the three drug suspects killed in a police operation in Binondo, Manila, on Oct. 6, 2016. —LYN RILLON

Solicitor General Jose Calida has reneged on his word to furnish the Supreme Court copies of official police reports and other pertinent documents on the death of some 4,000 suspects in the government’s anti-illegal drug campaign.

Invoking national security, the state lawyer asked the high court to annul its Dec. 5, 2017, order which compelled the Philippine National Police to submit within 60 days its investigation reports on the implementation of President Duterte’s brutal war on drugs.

Calida’s response, which was contained in a petition dated Dec. 18, 2017, was received by the high court on Thursday.

“The records must be there because these are supposedly legitimate drug operations. I want the names, addresses and all these reports. You must know them because you are investigating them,” Carpio had told Calida.

Calida had told the high court that he would comply with its request for the pertinent documents.

He backtracked a month later.

Calida said the Office of the Solicitor General (OSG) had moved to nullify the order “after reviewing the relevant laws and jurisprudence.”

“The production of documents required … involve information and other sensitive matters that in the long run will have an undeniable effect on national security,” Calida argued.

“(I)t could spell the success or failure of follow-up operations of (the) police and other law enforcement bodies, aside from endangering the lives of those on the list as well as those already in custody,” he added.

‘Not a trier of facts’

The OSG said that the 1987 Constitution mandated that the people’s right to information must be “limited to ‘matters of public concern,’ and is further subject to limitations as may be provided by law.”

Calida said the 15-member tribunal should not be a “trier of facts” and that the documents the magistrates were seeking were “patently irrelevant” to the judicial challenge against the drug war.

“Like all constitutional guarantees, the right to information, with its companion right to access to official records, is not absolute,” the OSG told the tribunal in a 14-page petition.

“By requiring the (PNP) to submit the … information and documents, the court has ventured into unwarranted factual inquiries,” read the OSG petition.

Calida added that the court’s directive “would require significant utilization of man-hours and other scarce resources” of the 165,000-strong police force.

Among the documents that the high court had asked the police to submit are the names of police officers who took part in the antidrug operations also known as “Oplan Tokhang,” the police operational plans, and other important information pertaining to police operations against drugs from July 1, 2016, up to Nov. 30, 2017.

The magistrates also asked for the names of the PNP crime scene investigators who processed the bodies and gathered the evidence at the crime scenes, as well as the police investigation reports on the alleged summary killings of drug personalities, which the PNP has officially described as “deaths under investigation.”

Calida said the documents requested by the high court were not cited in the petition filed by the Free Legal Assistance Group, which sought the tribunal’s judicial intervention on behalf of a “tokhang” survivor and two other people whose relatives were slain in police operations.

Another group of petitioners, represented by Joel Butuyan of the Center for International Law, brought a class suit against the PNP to keep a neighborhood in San Andres Bukid, Manila, safe from police who had allegedly killed 35 residents in the community since the antidrug campaign started.