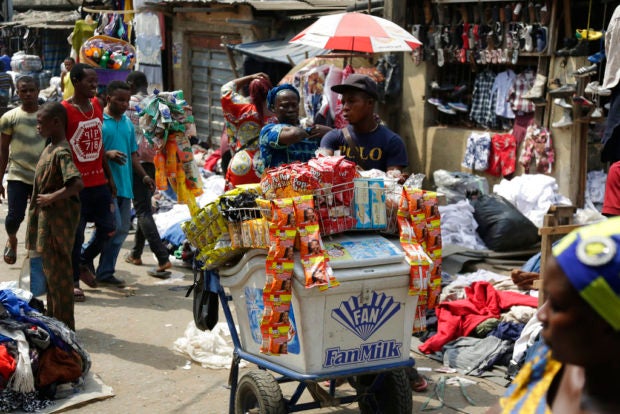 Pedestrians shop in a roadside market in Lagos, Nigeria, Friday, Jan. 12, 2018. Africans were shocked on Friday to find President Donald Trump had finally taken an interest in their continent. But it wasn’t what people had hoped for. Using vulgar language, Trump on Thursday questioned why the U.S. would accept more immigrants from Haiti and “shithole countries” in Africa rather than places like Norway in rejecting a bipartisan immigration deal. On Friday he denied using that language. (AP Photo/Sunday Alamba)

PORT-AU-PRINCE, Haiti — Haitians have taken special offense to Donald Trump’s “shithole” slur targeting countries including the island nation, where some detect a hint of racism linked to their historic independence as the first black republic.

“Of course it crushes our pride,” said Roberson Alphonse, who said the US president had a “disturbed brain.”

“Even when he apologizes — without really doing so — he uses hurtful words reminiscent of ‘poor country,'” said the resident of Port-au-Prince, while he attended ceremonies paying tribute to victims of the 2010 earthquake.

Trump was reported to have referred to Haiti, El Salvador and African nations as “shithole countries” during a White House meeting with lawmakers on immigration reform.

The remarks struck a particular nerve in Haiti, which on January 12 recognized the tragic quake that caused the death of more than 200,000 people.

Speaking at the ceremony, President Jovenel Moise did not mention the vulgar language used by his American counterpart, instead simply recalling that “Haiti is a country like others on Earth” to applause.

After its independence in 1804, Haiti was ostracized by nations, many of which allowed slavery, were slow to formally establish diplomatic relations with black leaders.

France did not recognize the independence of what was its richest colony until 1826, and has dismissed a petition to pay reparations that would now total more than 17 billion euros.

“Haiti has been sold as a country of problems: we must go back to historical issues to understand how Haiti came to be seen as different,” said Renald Luberice, secretary general of the Council of Ministers.

“Today, unfortunately, there are people who cannot move past that image, but rest assured, we are a normal country.”

Erol Josue, an artist and priest of voodoo, the religion that launched the 1803 slave revolt, said he was “stunned but not surprised” at Trump’s comments.

In Haiti, he said, “we still pay for independence, for this culture that we have.”

“This is a good time for all Haitians to begin to realize how other people see us,” Josue continued. “Trump dares to speak — but it’s also the though process of many, many, many other people in the world.”