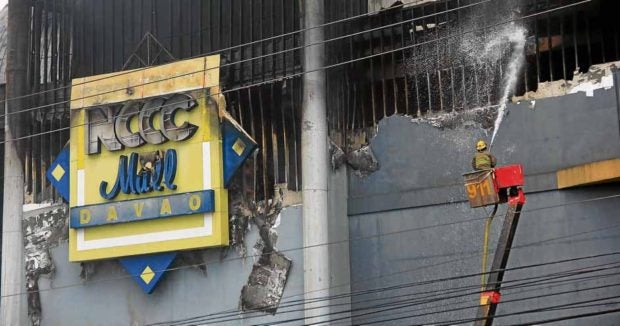 DAVAO CITY — The investigation being conducted by the two American fire experts who were hired as third-party investigators by the management of NCCC Mall would not have any bearing on the results of the government’s probe, the head of the Inter-agency Anti-Arson Task Force (IAATF) said on Wednesday.

The Americans arrived here on Tuesday and started inspecting the ill-fated mall on the same day to find clues on the origin of the Dec. 23 fire that killed 38 persons, as well as to gather other significant data.

The task force chief, Senior Supt. Jerry Candido, said they had granted the arson probers full access to the burnt mall. But whatever findings the two experts could later draw would not have any impact on the results of the task force’s investigation, he added.

Among other tasks, the IAATF would seek to determine fire safety violations on the part of the mall.

“It’s our report that would prevail and we are the ones authorized to file appropriate cases (against people found accountable for the fire),” Candido said in a press briefing here.

He also said they were eyeing possible charges against eight active and retired local fire officials for allegedly signing the mall’s fire safety compliance documents despite its apparent safety violations. —Frinston Lim with reports from Judy Quiros and Mart Sambalud